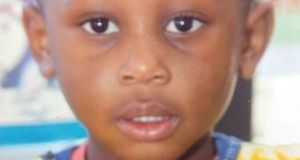 A lift installation company that had pleaded guilty to health and safety breaches following the death of a three-year-old child in 2014 has not been fined.

Solomon Soremekun died from crush injuries after falling into a lift shaft in an office building in Galway city on January 13th, 2014.

He had been with his mother who was visiting the Department of Social Protection in the Hynes Building, St Augustine Street.

The lift had been fitted by Ennis Lifts Ltd and a director on behalf of the company had pleaded guilty at Galway Circuit Criminal Court last week to having installed the lift with a larger space than was legally allowed.

At the sentence hearing on Friday, Judge Rory McCabe noted the guilty plea, and the absence of any evidence of causation and found the facts proven against the company.

“Behind all this there lies a human tragedy, a lost life and a traumatised and grieving family. No parent expects to have to bury a child,” the judge said.

Ronan Kennedy SC defending, said the lift had been in operation for 16 years — since 1998 — without any adverse incidents. He also said Ennis Lifts Ltd was not responsible for the lift maintenance from 2006 onwards.

In his judgment on Friday, the judge said while the lift company had pleaded guilty, there was no evidence before him that the facts grounding the offence to which it had pleaded guilty caused or contributed in any way to the death of the young child.

“There is no evidence of how the child died and what in general terms caused this tragic and shocking death, but that seems to be the way in terms of this prosecution,” he said.

“In the absence of any evidence as to what culpability or blame attaches to Ennis Lift as a consequence of the offence to which they have pleaded guilty, I have no basis for determining where this offence stands on the scale of the evidence adduced by the prosecution.”

He asked how he could “meet the interests of justice and the requirement of fairness and due process”.

“On the evidence, I feel constrained to simply note the plea of guilty, the absence of any evidence of causation and find the facts proven,” he said.