Man sentenced to 5 years for threatening to kill ex-partner 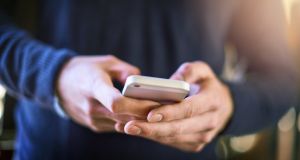 The woman got a message with a picture of a knife saying: ‘That’s for f**king you, I am outside. Answer the f**king door.’

A man who sent the mother of his children a photo of a knife and of her front door telling her “I’m going to do something bad tonight” has been sentenced to five years for threatening to kill her.

Luke Murphy (32) of Abbey View, Monkstown, Dublin, pleaded guilty at Dublin Circuit Criminal Court to making a threat to kill or cause serious harm on dates between February 12th and 13th, 2018. He has two previous convictions for drug offences.

Judge Melanie Greally suspended the final two years of a five-year term on strict conditions including that Murphy engage with the Probation Service and attend for treatment in a domestic violence perpetrator programme if he is considered suitable and comply with conditions of his barring order.

The judge had adjourned the case having previously heard evidence. She said on Wednesday that the offences represented a breach of trust and were of “an extremely menacing nature”.

She said they had been “accompanied by pictures and very concrete suggestion that they would be carried out”.

The judge also noted that Murphy was in close proximity to the woman when he issued the threats and said they had caused “enormous trauma and fear” to his former partner and children “as evident in the victim impact statement”.

Garda Aaron Bradshaw told Gerardine Small BL, prosecuting, at the earlier hearing, that the woman got a protection order against Murphy on January 2nd, 2018 having received threats via phone the previous day that she would end up in hospital and he would throw acid in her face.

On January 28th he then sent her aggressive text messages having found out that she had gone out the previous night. He called to her home to question her and an altercation broke out. Four days later, Murphy called to the house again and took the woman’s phone and her son’s phone.

He searched through the phones. Over the next few days he continued to send abusive and threatening messages which resulted in a second altercation on February 6th, 2018 during which she was injured after she scratched Murphy’s face.

Garda Bradshaw said five days later the woman received a message from Murphy saying he was going to kill her. “You watch,” he said before he threatened their son saying he would “leave him f**king blue”.

The woman replied telling Murphy to leave her alone. Later that day she got a message with a picture of a knife saying “That’s for f**king you, I’m going to do something bad tonight. I am outside. Answer the f**king door.”

Garda Bradshaw said Murphy then rang the woman three times before he also sent her a photograph of her front door.

The garda said he responded to a call about a domestic disturbance that day and met the woman who told him about the messages and showed him her phone. Murphy was arrested that night and taken in for questioning.

Garda Bradshaw said Murphy made admissions, outlining their relationship and said he was just “p*****d off and angry”. He said he didn’t intend to hurt the woman and said he would not go back to the house.

Garda Bradshaw agreed with Marc Murphy BL, defending, that his client’s previous convictions were consistent with having a cocaine and cannabis problem. He accepted his mother died in a house fire when Murphy was quite young.

He accepted that he was not on the Garda radar previous to this and was anxious to maintain contact with his children.

“He accepts the relationship is over but he is extremely anxious to stay in contact with the children,” Mr Murphy told Judge Melanie Greally.