Man had to have part of testicle removed after assault, court told 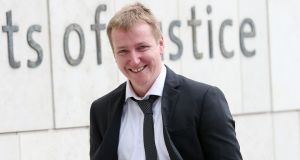 A Galway resident has gone on trial accused of assaulting another man who had to have part of his testicle removed following the altercation.

Mr Devlin told Diarmuid Collins BL, prosecuting, that he had been ejected from McSorley’s pub in Ranelagh after an incident with bar staff clearing away his group’s drinks. He said he approached another group of people outside the pub to see if they knew the bar staff, as this group had been allowed to remain on the premises.

Mr Devlin said the group’s demeanour was aggressive and he had a short verbal exchange with one man, before this individual punched him twice in the face and kneed him in the groin.

Mr Devlin said he hadn’t thought the incident would have ended in a fight as it all happened quickly since exiting the pub.

He said he felt “extreme pain” immediately after being kneed and “I kind of crumpled to the ground.” He, his partner and two friends left the scene and he presented to hospital the next day as he had felt faint with the pain in his groin.

Mr Devlin said doctors later told him he had a ruptured testicle and he had surgery to remove part of it.

The witness told Mr Collins that he was not “overly intoxicated at all” on the night and described himself as coherent and “certainly capable of remembering everything”.

He agreed with Keith Spencer BL, defending, that he told the jury “I think I’m certain” when pointing out the individual he said assaulted him on CCTV played in court.

Mr Spencer put it to him that there was some equivocation in his language. Mr Devlin replied that the individual he identified on CCTV in court was the same person he had pointed out to gardaí­ on the same footage during the investigation.

He added that saying “I think I’m certain” was about getting it right in court.

In his opening address to the jury, Mr Collins said he didn’t know if the issue of self defence would arise in the case, but that the prosecution say the accused did not act in self defence.

He said it was the prosecution’s case that Mr Leonard acted in a “vindictive and malicious” manner and that he had taken off his shirt prior to the assault.

The trial continues before Judge Karen O’Connor and a jury of five women and seven men.