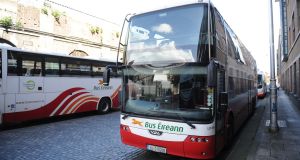 Judge Gerald Keys said the video of the incident ‘speaks for itself’ and dismissed the claim for damages. Photograph: Aidan Crawley

A judge has told a court that Bus Éireann would have to stop carrying passengers altogether in the morning if a personal injury damages claim by a 77-year-old Limerick man was to succeed.

At Ennis Circuit Court, Judge Gerald Keys made his comment when dismissing the personal injury claim against Bus Éireann by passenger John Mackessy.

Mr Mackessy claimed that he sustained injuries to his right side and shoulder when a bus scraped the side of a Toyota Yaris three years ago on the outskirts of Limerick.

The bus was travelling two to four miles per hour at the time of impact and the driver of the Toyota Yaris, Aimee Quirke, told the court that she paid €150 from her own pocket to repair the “tiny bit of paint” scraped off her car from the “slight tip”.

In court, retired confectioner Mr Mackessy said he was “in constant pain” from the incident at the Westbury estate in June 2016.

Mr Mackessy of Granian, Westbury, Corbally, claimed that before the impact at about 6.30pm on June 16th, 2016, at Westbury outside Limerick city, the bus he was a passenger on “picked up a fair bit of speed” and mounted a kerb.

However, on-board Bus Éireann CCTV footage of the incident that displayed a speedometer, showed in court that the bus slowed down from 22 miles per hour on the straight to a maximum of four miles per hour when making contact with Ms Quirke’s car as it turned into the Westbury estate.

Mr Mackessy told the court he didn’t realise he was hurt, but when he got home he felt a pain.

“It got worse and worse. I had a terrible time with it. I couldn’t sleep that night with the pain.”

He said: “You can feel pain but you can’t see it. As I sit here, I am in some discomfort with it.”

When challenged by Niall O’Driscoll BL, for Bus Éireann, he said he was “not exaggerating” .

In his judgment, Judge Gerald Keys said the video of the incident “speaks for itself” and dismissed Mr Mackessy’s claim for damages against Bus Éireann and Ms Quirke.

“I can only come to one conclusion: that the impact between the bus and Aimee Quirke’s car could not have caused Mr Mackessy’s injuries.”

Judge Keys said: “I am not saying that Mr Mackessy did not suffer from the injuries complained of. All I am saying is that it is highly unlikely they were caused by the bus on that date.”

On-board CCTV footage also showed the reaction of Mr Mackessy and other passengers to the impact and the judge said it showed no deviation of any movements of passengers, including Mr Mackessy.