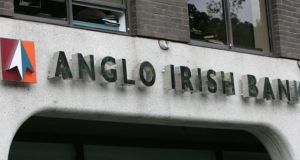 Three former bankers were in Mountjoy Prison in Dublin last night after receiving jail sentences for their roles in a €7 billion fraud committed at the height of the banking crisis in 2008.

Judge Martin Nolan said the senior executives had taken part in a “dishonest, deceitful and corrupt” scheme to make Anglo Irish Bank’s finances look stronger than they were.

The scheme, described by the judge as a series of “sham transactions”, involved Anglo placing massive sums with Irish Life and Permanent and receiving the money back, via a non-banking subsidiary, as customer deposits.

The short-term transactions enabled the bank to disguise a heavy loss in customers’ deposits, which would have confirmed the widely held suspicion in the market that Anglo was close to collapse.

The men did not react when the sentences were handed down. They conferred briefly with their lawyers before being led out of court. Under court rules they have 28 days to lodge a notice of intention to appeal the sentences.

Judge Nolan said he was aware that certain State authorities had turned a blind eye to “optically driven balance sheet management” which he said was a euphemism for banks entering into transactions which had little or no effect.

Lawyers for the three men argued during the trial that their motivation in authorising the deal was the “green jersey” agenda – the financial regulator’s request for Irish banks to support one another as the financial crisis worsened.

A spokeswoman for EY said the firm was not a party to the court proceedings and had co-operated with requests from the prosecution for witnesses and documentation in relation to the case.

“Neither the prosecution nor the defence chose to call any EY witness to give evidence at the trial in front of Judge Nolan,” she said. “We will not be commenting further on this matter due to ongoing proceedings.”

In response to the sentence handed down to Denis Casey, Irish Life said the matters investigated by the court took place eight years ago when Irish Life was under a previous ownership structure, as part of Irish Life & Permanent.