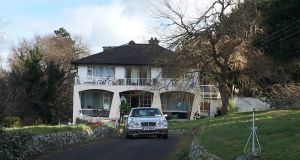 Judge Jaqueline Linnane heard people from South America and Eastern Europe are living in dangerous, unhealthy and cramped conditions at The Pines (above), at Lehaunstown, Cabinteely, and that the property was being rented by owner Richard Stanley to a man called Christian Carter. File photograph: Bryan O’Brien/The Irish Times

Dozens of occupants, who are unlawfully being rented accommodation in an “unauthorised hostel,” will have to leave the premises by next Wednesday following a court order.

Judge Jaqueline Linnane heard The Pines, Lehaunstown, Cabinteely, where people from South America and Eastern Europe are currently living in dangerous, unhealthy and cramped conditions, was being rented by owner Richard Stanley to a man called Christian Carter.

Barrister Michael Binchy, for Mr Stanley, said his client was an elderly man in his 80s and in poor health. Mr Stanley had rented the property to Mr Carter, of Dunedin Drive, Monkstown, Co Dublin and at Grove Park, Rathmines, Dublin, and had been unaware of the situation.

Counsel said Mr Stanley was consenting to orders sought by Dún Laoghaire-Rathdown County Council restraining the continued use of the house as a multi-occupancy dormitory property.

Dublin Circuit Civil Court heard that a son of Mr Stanley, who lives in the UK, had arranged for the tenancy agreement with Mr Carter, who rented the property for €4,000 per month.

Judge Linnane was told the agreement had not been registered with the Residential Tenancies Board and Mr Carter had been taking up to €1,500 a month out of the property by sub-renting it.

Mr O’Connell said Mr Carter had been aware of the proceedings and could be served personally with court documents today as it was believed he was in the Four Courts complex in relation to another matter.

Mr Binchy said Mr Carter had stated in an email that he would empty the premises by March 1st next. Mr Stanley and Dún Laoghaire-Rathdown County Council had concerns about the welfare of the residents and thought the date was too far away.

Mr O’Connell told Judge Linnane that the residents were aware of the proceedings “coming down the track” and of various inspections of the premises by the local authority. The court heard they expected they would have to vacate the premises.

Last Monday, when the matter first came before the court, the councill had said that the overcrowded private dwelling was considered a fire and health risk.

“It has come to the council’s notice that the three-storey dwelling is being used as other than a private dwelling with up to 17 individuals in one room and about 36 people housed in the basement,” Mr O’Connell told the court.

Aonghus O Neill, a planning inspector with the local authority, stated in a sworn document that the Lehaunstown house, on four levels, was registered at the Land Registry in the name of Richard Stanley as owner. It comprised a basement with two rooms, a ground floor, first floor and attic level.

Mr O’Connell told Judge Linnane that the County Council had become aware of reports that up to 70 people were being accommodated in the house and for health and safety reasons had carried out an inspection.

He said Mr O’Neill and another council inspector, Aidan Shannon, found that almost every room they could obtain access to had been filled with either double-beds or bunk beds.

Loose electrical cord providing power to a washing machine and two tumble dryers at the top of a stairs leading to the basement had to be avoided. In a boiler room there were no smoke or heat detectors and flammable materials were scattered about the room.

One room in the basement contained 11 bunk beds and a second room contained five bunk beds and two double beds. There were electrical extension cables across the floor. Each of the beds appeared to have been recently slept in.

They had found a communal dining room and a living room which had been turned into dormitories. Three rooms on the first floor had been locked shut.

Mr O’Connell said the use of the property had changed from that of a private dwelling to one involving the provision of accommodation to paying customers in the course of commercial activity whereby occupants were accommodated in large communal dormitories.

The local authority sought orders to immediately end the use of the property “as what can only be described as an unauthorised hostel”.

The court heard that Mr Stanley will file a replying affidavit.

On Friday Judge Linnane joined Mr Carter as a respondent to the proceedings and granted the local authority an order to cease unauthorised development at the property by midday Wednesday, February 1st.

The judge ordered that court documents be served on Mr Carter at his two addresses and also on the occupants at the Lehaunstown house. She adjourned the matter to next Thursday.