Denham highlights financial burden on judges who live outside Dublin 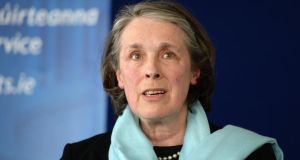 Chief Justice Susan Denham has warned the Government it risks creating a more homogenous and “second best” judiciary by refusing to ease the financial burden on High Court judges who live outside Dublin.

In a strongly worded letter to Minister for Public Expenditure Brendan Howlin last November, Ireland’s most senior judge revealed that a candidate who had been recommended for a High Court vacancy last year withdrew his name at the last minute after concluding he could not afford to take the position.

“This person was recommended by the Judicial Appointments Advisory Board and would make an excellent judge of the High Court,” Mrs Justice Denham wrote. “I am concerned that this reflects a new and important reality.”

This is the first official suggestion that the judicial pay cuts of up to 50 per cent are deterring lawyers from seeking places on the bench.

Mrs Justice Denham’s letter, marked “Private and Confidential” and released under the Freedom of Information Act, followed an earlier refusal by Mr Howlin to sanction travel and subsistence allowances to High Court judges whose family home was at least 100km from Dublin.


Cumulative costs
The Chief Justice had sought permission to redirect funding for this from elsewhere in the Courts Service budget, saying she was concerned that the pool of potential applicants for High Court vacancies was being reduced by the cumulative effect of a big pay cut and high costs incurred by judges who live outside the capital.

Circuit and District Court judges are entitled to a travel allowance, but not those on the High Court. At present two High Court judges live outside Dublin.

Mr Howlin, in a letter dated November 14th, said he was “unable to accede” to this request but that it could be considered again if the economic situation improved.

“It should be a matter of concern at the highest levels of Government that you have refused a request which would not create an additional burden on the Exchequer, and the effect of which may well contribute to a ‘second best’ judiciary in Ireland,” the Chief Justice wrote. “This is contrary to the Government’s commitment to ensuring the recruitment of the very best persons across Ireland’s public service.”


‘Second best’
The reference to a “second best” judiciary is taken from Tom Bingham, a former lord chief justice of England and Wales, who Mrs Justice Denham quoted as having said that unless the rewards of judicial office are sufficient to attract the ablest candidates, “the ranks of the judiciary must be filled by the second best . . . and there would be an inevitable lowering in the standing and reputation of the judiciary.”

In her letter, the Chief Justice told Mr Howlin: “I regret that your decision will result in Ireland’s High Court judiciary becoming more homogenous . . . I wish to see a more diverse judiciary in the High Court, for the good of all Ireland, and not one almost exclusively from Dublin.”

The president of the High Court, Mr Justice Nicholas Kearns, wrote to Mr Howlin on the same topic last October and received an almost identical response from the Minister. He wrote that because of the problem he was “seriously apprehensive that there may be a dearth of suitable candidates” for three High Court vacancies.

What is a High Court judge paid?

Pension and lump-sum benefits for judges are calculated by reference to total reckonable service and salary on the last day of service.

In the case of High Court judges, pension comprises 1/40th of salary for each of the first five years of service and 3/80ths of salary for each subsequent year of service – subject to a maximum of ½ times salary. The Department of Public Expenditure and Reform says this accrual rate is almost twice as fast as for other public servants.

Pension terms have changed in recent years. Under the Public Service Pensions (Single Scheme and Other Provisions) Act 2012, incoming judges will have to serve 20 years instead of 15 before they can draw a full pension. They also incur additional liability to tax in respect of the judicial pension and any savings for private pension provision made while working as barristers or solicitors.

The High Court regularly sits outside Dublin. When it does, judges are entitled to some travel and subsistence expenses. They are also paid expenses for attire and attendance at conferences in their official capacity.

The High Court judge who was paid the highest expenses last year received €9,462.00. The lowest outlay to a single judge was €80.35. The Courts Service says total judicial costs last year were almost 30 per cent lower than in 2008.