Man sent back to prison to serve remainder of sentence 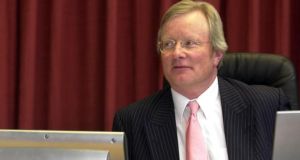 A Dublin man who punched a taxi driver and stole his vehicle has been sent back to prison following an unsuccessful appeal against conviction.

Aaron McCarthy (22) of Crinan Strand, Dublin, had pleaded not guilty to robbery and taking a vehicle without authority at Lisburn Street in the capital on August 13th, 2011. He admitted to stealing a bicycle on the same occasion.

He was found guilty by a jury at Dublin Circuit Criminal Court and sentenced to five years imprisonment.

McCarthy, who had been on bail for the application, had his appeal against conviction dismissed on Monday by three judges of the Court of Appeal and he was returned to prison.

Mr Justice Alan Mahon said McCarthy had hailed a taxi to take him to Spencer Dock. En route two additional passengers joined him and the driver, Balbir Singh, was punched in the face, had his taxi, mobile phone and bank cards stolen.

He had appealed his conviction on two grounds: the manner in which the trial judge dealt with a garda’s evidence in his charge to the jury and reference to the possibility that McCarthy may have lied during Garda interviews about his reason for being out after 2am.

Mr Justice Mahon said it would have been preferable if the trial judge had not referred to the potential risk to a garda’s career if McCarthy had been acquitted.

However, the trial judge adequately dealt with the comment in his redirection to the jury having been requested to do so. He referred to the earlier reference in order to place it in its proper context and it was “difficult to see what more could have been said”.

On the second ground, Mr Justice Mahon said the court was satisfied the judge’s comments were not inappropriate or detrimental to McCarthy.

Counsel for the Director of Public Prosecutions, Lorcan Staines, said McCarthy’s bail had come to an end, he was no longer on bail pursuant to an order made at an earlier date and was back in custody.

McCarthy was returned to prison where he will serve out the remainder of his sentence.