Court orders State to give documents to Bailey in civil action 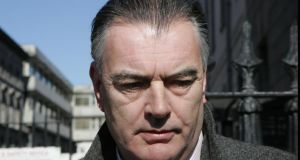 A High Court judge has said “very disturbing” and “unusual” matters related to the Garda investigation into the murder of French film-maker Sophie Toscan du Plantier justify orders requiring the State to discover a wide range of documents to Ian Bailey for his civil action over that investigation.

Following Mr Justice John Hedigan’s order, some 20,000 documents will be examined by State parties over the next three months to assess their relevance.

The material includes all correspondence relating to Mr Bailey between former DPP Eamonn Barnes (after his retirement) and his successors, James Hamilton and Claire Loftus; the Minister for Justice, the Attorney General and gardai.

Mr Barnes had expressed concern senior gardai were engaged in a “persistent” and “grossly improper” attempt “to achieve or even force” a prosecution of Ian Bailey for the murder in west Cork in 1996. Mr Bailey (56), a law graudate, has always denied any involvement.

Mr Bailey is seeking to establish the identities of gardai who allegedly attempted to ensure his prosecution with a view to possibly subpoenaing them to give evidence in his action for damages over alleged wrongful arrest and personal injuries.

He may also subpoena Mr Barnes who sent an email in October 2011 to then DPP James Hamilton. That was among material presented to Mr Bailey’s solicitors by State parties in late 2011 just before the hearing of his sucessful Supreme Court appeal against extradition to France in connection with the murder.

In the email, read in full yesterday, Mr Barnes said a former State Solicitor for west Cork, Malachy Boohig, told Mr Barnes in 1998 a senior garda had asked him to ask then Minister for Justice John O’Donoghue to approach the DPP with a view to securing a prosecution of Mr Bailey.

In a memo also read to the court, Mr Boohig said he had been asked to attend a case conference on the murder at Bandon garda station involving senior gardai from Cork and Dublin. He said two senior gardai “did all the talking” and made very clear to him there was more than sufficient evidence to enable the DPP isue a direction to proseucte the chief suspect with murder.

Mr Boohig said he had said the DPP had confirmed there would not be a prosecution as the evidence was “nowhere near” what was required. When he left the meeting, he was followed by the two gardai who stated “in very strong terms” he would have to persuade the DPP to direct a prosecution.

One of the officers said he was aware Mr Boohig had been at college with Mr O’Donoghue and he (Boohig) should use that connection to see if something could be done, Mr Boohig said. He had not replied to that comment and did not contact the Minister.

In his email, Mr Barnes said he was confident he and Mr Boohig had a general discussion regarding the murder and had agreed “the evidence came nowhere near to warranting a charge against Bailey”. Mr Barnes said he was “well aware” of Garda anxiety to charge Mr Bailey “and not just the Gardai in west Cork” as “strong and persistent advocacy” had been deployed on his office for “some considerable time”.

Mr Barnes said he considered any follow up action by his office then was unlikely to achieve anything useful and he decided to let the matter rest unless any future development made it appropriate or desirable to disclose it. He was raising it now as media reports regarding the French investigation of the case caused him concern.

He wrote there was “apparently a real possibility” Mr Bailey may be charged in France and perhaps jailed, “presumably on the basis inter alia of “evidence” and conclusions provided by what I regarded at the time as having been a thoroughly flawed and prejudiced Garda investigation culminating in a grossly improper attempt to achieve or even force a proseuctorial decision which accorded with that prejudice”.

Martin Giblin SC, for Mr Bailey, said his side wanted to use these and other documents in the civil action, including a 2001 analysis by an official in the DPP’s office of the murder investigation indicating “evidence of innocence on the part of Mr Bailey”.

The State had possession of that and other documents for many years but had not revealed them when France sought his extradition, he said.

Mr O’Higgins indicated the State is unlikely to object to Mr Bailey using those materials and other documents given to the Supreme Court but some of the other categories of documents sought were too wide.

Mr Justice Hedigan prefaced his ruling by saying he was very conscious of the very tragic circumstances of Mme Toscan Du Plntier’s death and the distress of her family.

The very unusual and disturbing circumstances in which the application arose, and the very serious claims by Mr Bailey in his case, justified orders granting more liberal discovery than usual, he ruled.

Other material to be disclosed includes communciations between gardai and the media concerning the murder investigation and documents relating to the taking of statements from, or contact with, Marie Farrell, who has alleged she was pressurised by gardai into making a statement adverse to Mr Bailey.