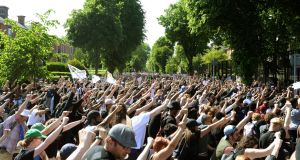 Supporters attend a rally in solidarity with Black Lives Matter outside the US Embassy in Ballsbridge, Dublin. Photograph: Dara Mac Dónaill

The Irish Council for Civil Liberties (ICCL) has said it was surprising the Garda had begun an investigation into the Black Lives Matter protest in Dublin as protesting was a “fundamental right” and could be considered a “reasonable excuse” under the Covid19 regulations.

In remarks strongly supportive of the protest in Dublin on Monday, involving up to 5,000 people, the council said anyone attending future protests should try to follow public health advice.

Chief medical officer Dr Tony Holohan said in recent days that the protest had been “a risk to life”. Now was “not the time” to organise or attend such mass gatherings due to the risk of transmitting Covid-19, he said.

Gardaí have begun a criminal investigation into the protest on the basis the public health regulations aimed to stopping the spread of Covid-19 make it illegal to organise an event or participate in an event during the current lock-down period.

The Garda investigation is focused only on the organisers as gardai said the scale of the protest meant trying to investigating all participants was not possible.

“We were very surprised to hear that the Gardaí are considering prosecuting the organisers of Monday’s event,” said the Doireann Ansbro, the Irish Council for Civil Liberties’ senior research and policy officer and leader of the council’s programme of protest rights.

She added the council understood there was a Garda presence at the protest and that the organisers co-operated with gardai and encouraged those in attendance to socially distance.

“It is welcome that the gardaí took significant steps to facilitate this protest,” Ms Ansbro said, adding because nobody expected such a large turnout it was “hard to hold the organisers responsible” for the size of the crowd.

She added the ICCL had seen gardaí facilitate other protests and that the list of what could be seen as “reasonable excuses” for an event was “not conclusive” which allowed the Garda discretion “to decide what may or may not be legal”.

“Our view is that given that protest is such a fundamental right and one of the key ways of vocalising dissent it could be considered a reasonable excuse,” she said.

“It is clear that no-one set out to intentionally flout the regulations on Monday and criminalising people who wish to make their voices heard in our democracy is not the answer,” she said of the protest.

Garda Headquarters confirmed gardai on duty on the day of the protest worked with people who presented themselves as organisers or leaders of the event in a bid to manage it once it began. However, it said it had no contact from the organisers in advance, adding the Garda does not organise or sanction any protests.

Garda sources said other protests had also been permitted to take place and were now under investigation. At some smaller protests the people in attendance had dispersed when asked to do so and so no follow-up investigation was required, they added.

Belfast councillors back investigation into Storey funeral 18:21
Coronavirus: One death, 25 new cases reported in State 18:26
Children who go abroad must self-isolate for 14 days before return to school in September 18:10
Angry Taoiseach calls for resumption of work on new National Children’s Hospital 17:56
Man tried to steal cars while high on crack and holding chihuahua 17:51