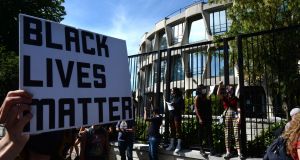 Supporters attend a rally in solidarity with Black Lives Matter outside the US embassy in Ballsbridge, Dublin, on Monday. File photograph: Dara Mac Dónaill/The Irish Times

A Black Lives Matter protest against racism and also recent acts of police brutality and killing in the US that had been planned for Dublin next Monday has been cancelled.

Organisers of the event released a statement on social media on Wednesday saying the event had been cancelled over concerns people involved may be prosecuted by the Garda.

An estimated 5,000 people took to the streets of Dublin on Monday for a mass Black Lives Matter protest, in contravention of Covid-19 public health regulations and advice, marching from O’Connell Street, Dublin 1, to the US embassy in Dublin 4 for a rally there.

The Irish Times revealed on Tuesday that the Garda had taken the names and addresses of some people at the march and were investigating the organisers of the protest, saying it was a breach of the Covid-19 regulations to organise such an event. Anyone prosecuted in this regard could face court sanctions of up to six months in prison.

While those who attended Monday’s protest march also breached the regulations prohibiting participation in such events, gardaí said it would be “unrealistic” to investigate all participants given the numbers involved.

A new Twitter account intended for public statements from the Black Lives Matter Dublin movement was established in recent days. It initially announced it had made contact with the Garda and had established a working relationship with them. However, despite stating on Tuesday that the group had “not received any correspondence suggesting the protest may not continue” next Monday, the group on Wednesday released an updated statement on Twitter confirming the planned event was cancelled.

“Following recent correspondence with An Garda Síochána we have been forced to cancel the protest on Monday, June 8th, outside the US embassy,” the statement issued on Wednesday said. “We must also ask you not to attend any protests in an attempt to protect organisers from potential prosecution.

“An Garda Síochána have not threatened or in any way attempted to intimidate the organisers; however, a number of safety concerns and potential criminal offences surrounding the protest were raised and we have elected to cancel with the possibility of rescheduling.”

Following recent correspondence with An Garda Siochana we have been forced to CANCEL the protest on Monday 8th June, outside the US Embassy. We must also ask you NOT TO ATTEND ANY PROTESTS in an attempt to protect organisers from potential prosecution. PLEASE SHARE.

It added the “safety and legality of the protest for both attendees and organisers is our primary concern”.

However, Merj Ireland, which describes itself as “a group of migrants and ethnic minorities living in Ireland fighting for reproductive justice for all people”, has said it plans to press ahead with what it says is a separate demonstration outside the US embassy on Eglin Road on Saturday at 3pm. It has called on anyone living within 5km to attend for what it says will be a socially distanced event.

In replay to queries from The Irish Times on Tuesday, Garda Headquarters confirmed the protest last Monday was under investigation and that specifically the inquiry focused on the organisers who arranged the event during the Covid-19 lockdown period.

Meanwhile some 2,000 people took part in a Black Lives Matter protest at the City Hall in the centre of Belfast on Wednesday.

There was some social distancing and many of the protestors wore face masks, but the crowd was often tightly packed together.

The Police Service of Northern Ireland (PSNI) said in a statement that its officers “engaged with the organiser before and during the event and maintained a presence throughout.

“We will continue to engage, explain and encourage people to make the right choices and enforce the law as appropriate.

“Everyone is urged to be mindful of the Regulations: each of us has a personal responsibility to follow them and do everything we can to stop the spread of Covid-19,” the police said.

The North’s economy minister, Diane Dodds, said that “we have all watched with horror the video of George Floyd and the terrible things that have happened, and many people are concerned to make their voice heard and to let the authorities know they stand in solidarity.”

But she also said that it was “incumbent upon all of us to act responsibly, to practice social distancing, to have good hand hygiene, and while we may want to stand in solidarity with those in the United States and lift the Floyd family, who have been grievously hurt by all that has happened, I think we have to have a responsibility to ourselves and to others in our immediate vicinity here in Northern Ireland.”

A virtual book of condolence was opened in Derry in memory of George Floyd, an African-American man who was killed by a police officer in Minneapolis last week.

The mayor of Derry, Brian Tierney, said it was a way for people to “collectively register a peaceful and united protest against all forms of racism and make our voice heard in safe way.”