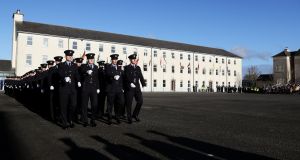 Student gardaí training at Templemore are to be sworn into the force early to take on frontline policing tasks , in an unprecedented move as part of a new coronavirus policing plan.

Garda Commissioner Drew Harris is on Friday morning set to announce the details of the new measures.

The Garda College in Co Tipperary has effectively been closed in order that the students, and Garda staff working at the college, would be freed up for policing.

The students will effectively skip the final months of their training and becoming fully attested gardaí immediately. Some of the trainee gardaí have been in the college for just over a month and were being given rapid training in public order policing ahead of their dispatch onto the streets as fully attested gardaí.

It will mean that approximately 450 Garda members can be dispatched from the college to the frontline as fully attested members of the Garda once the emergency attesting is completed in coming days. A ceremonial passing-out ceremony will be held for those new gardaí at some point later this year.

It is also possible the college could be used as a medical centre or an isolation or quarantine facility for people who contract coronavirus. However, while that has been discussed with the Health Service Executive, no final decision has been made and sources said the need for that may never arise.

The same sources said the extra personnel freed up from the college would also allow for more high-visibility policing that would offer reassurance to the public. And it would enable the Garda force to take on tasks it would not normally undertake, such as making deliveries of items like food to people in remote areas if required.

If the crisis became very acute, gardaí could also be deployed as support for health officials in ensuring people went into isolation even if they did not want to.

An officer of deputy commissioner rank is also set to lead a National Co-ordination Centre, which will co-ordinate the Garda’s response. Regular briefings and meetings, up to daily if required, are also set to be put in place within the force.

The Garda roster is also set to undergo changes for the duration of the crisis to ensure resources are available when and where they are required and also to ensure there is flexibility to respond to any needs that may arise.

However, Garda leave is not being cancelled, though the granting of leave will be more closely reviewed.

Mr Harris was due to brief the Association of Garda Sergeants and Inspectors and the Garda Representative Association at Garda Headquarters, Phoenix Park, Dublin, on Friday morning. A media briefing was also planned early on Friday as part of the force’s efforts to communicate its plans to the public.

Sources said panic buying at shops was of concern in that it suggested a degree of public alarm, adding the additional patrols and Garda visibility would allay those sentiments. But they added the plans now set to be unveiled were already well-advanced before the scenes of panic buying in some areas emerged on Thursday.

The announcement of restrictions by the Government saw long queues in supermarkets across the country with two Tesco stores in Dublin closing their doors temporarily because of the numbers trying to get in.