Coronavirus Q&A: What new powers have the gardaí been given?

Will I be arrested for jogging 2.1km from home? What about travelling to my holiday home? 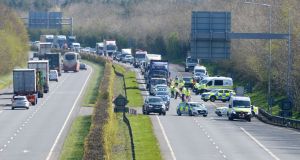 A large Garda checkpoint on the M4 near Celbridge, Co Kildare as new powers come into effect. Photograph: Alan Betson

I thought the Taoiseach announced restrictions on movement two weeks ago?

When Leo Varadkar announced measures limiting non-essential travel and work in his Friday night address two weeks ago he was in fact just requesting the public’s cooperation. Since then hundreds of gardaí have been stopping people and requesting they return home if they do not have a good reason to be out. However these requests were not backed up by any powers of enforcement and people were free to disregard them without consequence.

So what has changed?

On Tuesday night Minister for Health Simon Harris signed regulations granting powers of enforcement to gardaí. The powers were included in the Health (Preservation and Protection and other Emergency Measures in the Public Interest) Act 2020 passed by the Oireachtas in late March but only became active with the Minister’s signature.

The Government had hoped to hold off on signing in the powers for as long as possible, especially when public compliance with the guidelines remained high. Delays were also caused by legal discussions with the Attorney General about the extent and wording of the powers.

Despite reservations from some Cabinet Ministers, a decision was taken this week that the powers were needed following advice from Garda Commissioner Drew Harris about the likelihood of large crowds travelling for the Easter weekend.

As a result, between now and Sunday night, gardaí can arrest and detain anyone who refuses to comply with the regulations. Defendants will face a maximum prison term of up to six months and a fine of up to €2,500 on conviction.

What will be considered a breach of the regulations?

The regulations are based on the guidelines issued by the Government two weeks ago. Anyone exercising more than 2km from their home or with people from outside their household will be in breach. Anyone travelling beyond 2km for non-essential reasons will also be in breach. The Government has released a list of what are considered essential workers.

People can also travel for a variety of other reasons listed. These include essential shopping, medical and veterinarian appointments, funerals, court dates and court mandated child visitation.

There is also provision for travel to “attend to vital family matters”. Much of this is likely to come down to the judgement of individual gardaí.

For example, Drew Harris said on Wednesday that delivering an Easter egg to a relative is “sadly” not essential travel, but visiting them to attend to an urgent health need is.

The powers will be in effect until Sunday, although the Government has signalled they may well be extended beyond that.

So I’ll be arrested for going for jogging 2.1 km from home?

No. While it is technically an offence to breach the regulations, gardaí have been instructed to only resort to arrest when someone refuses to comply with their direction, for example someone who refuses to return home after being caught engaging in non-essential travel. In practical terms the offence will be failing to comply with Garda direction rather than breaching regulations.

People found to be in breach will be given a chance to comply by returning home or exercising within the 2km radius. Mr Harris has said he wants the powers to be used sparingly and only as a last resort.

What about travelling to my holiday home?

That’s a big no. Anyone caught travelling to a second home this weekend will be ordered to turn back. Operation Fanacht will see 2,500 gardaí at a time on the roads enforcing the regulations for the next four days in case people fine the temptation of the fine weather too hard to resist. The operation runs from noon today until Monday night and will involve thousand of checkpoints.

If you have already made the journey to your holiday home, the instruction is to stay there as that is now your primary residence, the Commissioner said.

Has the Garda ever had such sweeping powers before?

No, they are unprecedented. Since 1947, governments had the power to grant the Garda and health authorities somewhat similar powers to limit the spread of tuberculosis but these were never enacted. Even at the time of the Emergency during the second World War, a period when the Government had the power of censorship and internment without trial, there were no comparable restrictions on movement.

Have the new powers been met with any resistance?

The National Public Health Emergency Team (NPHET) carries out regular surveys on public views of the guidelines. The most recent survey found 86 per cent of people believe the current measures are “about right.” However that survey was taken before people faced criminal sanction for breaching the restrictions.

The Irish Council for Civil Liberties (ICCL) has questioned the need for new powers while public compliance remains high. It said they should be used sparingly and strictly recorded and monitored.

“Any heavy-handed enforcement of the regulations carries serious dangers for the relationship between gardaí and the public, especially around asking for documentary proof of employment. Criminalising those who do not comply could clog up the criminal justice system at a time when courts are closed but for urgent cases and prisons are trying to achieve physical distancing,” it said.

Are any other new measures being introduced?

Yes. From today, frontline gardaí will be issued with “spithoods”, full face masks which are placed over the heads of violent suspects to stop them spitting at gardaí. The force has ordered 16,000 of the hoods which will be used for the duration of the public health crisis. Their introduction comes following several instances of people spitting or coughing on members and claiming to have Covid-19.

The hoods have caused controversy in other countries and have been called dangerous and degrading by human rights groups. The Commissioner said they will only be used as a last resort.

*This article was corrected on April 9th, 2020 to reflect the fact that it is an offence to breach the regulations.