Cavan deaths: Hawe family to be laid to rest in home parish 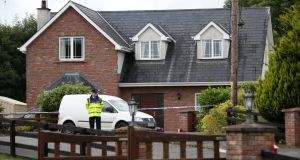 Gardaí outside the house at Oakdene, Barconey near Ballyjamesduff, Co Cavan, where the Hawe family died. Photograph: Colin Keegan/Collins

All five members of the Hawe family will be laid to rest in their home parish in Co Cavan on Saturday.

Gardaí were last night continuing to examine the Ballyjamesduff house where Clodagh Hawe and her three sons were murdered by their father before he took his own life.

The remains of Ms Hawe, her husband, Alan Hawe, and sons Liam (13), Niall (11) and Ryan (6), will repose at Finnegan’s funeral home in Cavan town between 3pm and 8pm tomorrow .

Fr Felim Kelly, curate in the parish of Castlerahan and Munterconnaught, will celebrate Requiem Mass on Saturday at 4pm in St Mary’s Church, Castlerahan.

The Hawes will then be laid to rest after the Mass in the cemetery beside the church.

Details of the funeral were published by the Catholic Communications Office.

In its statement it said that “out of respect for the solemnity of the funeral liturgy” and because St Mary’s Church had limited capacity it was “reserved for family, loved ones and parishioners only”.

A loudspeaker would be put in place so those outside could follow the Mass .

Garda sources said there was unease in the local community at the level of media attention which the violent events had given rise to.

The postmortems on the remains of the four murder victims and Alan Hawe had been completed last night.

The results are not being released by the Garda but The Irish Times understands Ms Hawe and her sons died violently at the hands of Mr Hawe.

Weapons, though no firearms, were used in the murders and gardaí have taken knives and a hatchet from the family home at Barconey Heights, Ballyjamesduff for examination.

He had left a note on the back door of the house warning any caller not to enter but to alert the Garda.

Clodagh Hawe’s family is from the area and it is understood it was her mother who called to the house and raised the alarm after finding the note.

A sealed letter was also found in the house as well as other shorter messages Mr Hawe had written and they have been taken away for examination by the Garda. The contents of that sealed letter have not been disclosed but it was written by Mr Hawe and is of evidential value in the case in that it relates to his actions.

Gardaí hope their interviewing of the couple’s family and colleagues will identify any difficulty the family, specifically Alan Hawe, may have been experiencing.