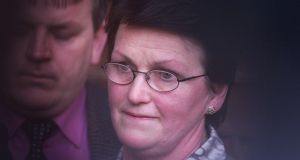 More than two decades after being convicted of hiring a gunman to murder her husband, and serving 17 years in prison, Catherine Nevin was still before the courts at the time of her death.

She was released last September from the Dóchas Centre women’s prison on the Mountjoy complex in Dublin, but her battle with her late husband’s siblings was ongoing.

They were determined that she should be disinherited of the estate of the late Tom Nevin.

Catherine Nevin was jailed in 2000 when she was convicted of her husband’s murder at their pub, Jack White’s Inn near Brittas Bay, Co Wicklow, on March 19th, 1996.

She later lost appeals against her conviction and failed to have it declared a miscarriage of justice.

Last March, the Court of Appeal ruled Catherine Nevin’s conviction for the murder of her husband could be used in their case aimed at stopping her inheriting any part of his estate.

That decision cleared the way for a full hearing before the High Court of civil proceedings by the siblings. They were also claiming damages against her for wrongful death.

In a counter-claim, Catherine Nevin, who always denied she was guilty of murdering her husband, claimed she was entitled to his assets, or part of them, by virtue of survivorship and the laws of intestacy.

In an affidavit to the High Court, she said she was quite happy to come to court and give evidence as she had nothing to do with her husband’s death.

The High Court in 2013 ruled the conviction was admissible in the civil case but Catherine Nevin’s solicitor, Anne Fitzgibbon, appealed.

The focus of the appeal was on the High Court determination, as a preliminary issue, that her conviction for murder was admissible in civil proceedings as “prima facie evidence of the fact that she committed such murder”.

The three judge Court of Appeal dismissed the appeal. It found the High Court had correctly decided admission of the conviction involved an exception to the rule against admitting hearsay evidence which was justified on grounds of necessity and relevance.

At the time of her death, the Supreme Court was still to decide whether Catherine Nevin’s murder conviction could be used in the disinheritance proceedings.