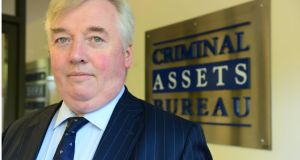 On the morning of June 27th, 1996, then taoiseach John Bruton stood up in the Dáil and said he wished to make a statement.

It was less than three weeks since 14 shots from a Kalashnikov assault rifle had been fired into a Garda car at Adare in Co Limerick, killing Det Garda Jerry McCabe, and less than 24 hours since two men on a motorcycle pulled up beside the red Opel Calibra of journalist Veronica Guerin on the Naas Road and shot her six times in the chest and upper body, killing her instantly.

“The situation,” began Bruton, “concerning the murder – on the order of people involved in organised crime – of a journalist, is a grave threat to our democracy and to the standard of life which this State has upheld for more than 75 years.

Less than four months later, the Proceeds of Crime Act was enacted and the Criminal Assets Bureau (Cab) was born.

“We can never lose sight of those tragic events that gave rise to the bureau and the particular legislation that was put in place,” says Det Chief Supt Eugene Corcoran, the head of the bureau.

“You’d have to picture an environment where things had developed in the organised crime world to the point where a piece of legislation like that was just absolutely necessary. The ultimate in terms of a criminal act against all of what is right and proper was to murder a journalist like that. I think it demonstrated for everybody – and I think especially for those who were in power – the imperative for legislation at that time.”

The inception of the bureau 17 years ago this week was designed to radically change the landscape of gangland Ireland. For the first time, the onus was placed on the citizen to prove assets were the proceeds of legitimate activity, rather than on the State to prove the contrary.

The imprisonment of convicted criminal John Gilligan in 1996 and his release from Portlaoise’s maximum security facility this week bookends the bureau’s existence to date – and Corcoran believes much has changed in gangland Ireland in the interim.

‘Level of violence’
“We’ve seen an escalation in the level of violence, and the number of deaths has vastly increased,” he says. “Criminals will use firearms against members of the gardaí. These are very dangerous people. That’s the very reason we exist.”

He highlights a younger age profile among criminals, the freedom to travel, and the rapid growth of telecommunications as other key developments.

“You’ve got practically free movement throughout Europe, ” he says. “You can have relatively easy communications now irrespective of location in a variety of ways that are very often difficult to detect and difficult to monitor. That has changed the face of how the investigations must be focused in terms of communications and supply lines for drugs. We have had to increase our level of expertise in that area and our level of co-operation with agencies in other jurisdictions.”

To help with this, the bureau is part of the Camden Assets Recovery Interagency Network. It is an international intelligence-sharing co-operative based in The Hague. Corcoran says in an age where criminality is international, there is more willingness than ever among these asset recovery agencies to work together – but legislation is needed to keep track of advances in technology.

“Our legislation doesn’t keep abreast of advances perhaps as quickly as it should . . . If you take all of the communications systems [such as social networking] and the possibilities that are opened up in that sphere, it’s not unreasonable that in certain circumstances access to data of that kind should be part and parcel of what’s available.

“There is an issue [at the moment] where communication records can be stored in other jurisdictions. Servers can be located in any part of the world in respect of communications that take place in Ireland.

“To retrieve that evidence is on some occasions impossible. It prevents law enforcement agencies here from having access to what would otherwise be important evidence. It could include data on where banks might be, what the account might be and the timing of transactions. If we were aware of where the bank is we have an opportunity to recover evidence. It also facilitates communication.

“It’s something that needs to be looked at in a global sense and involving those service providers. There must be some balancing in terms of what data should be available in a law enforcement capacity with appropriate supervision – much the same as with any search for evidence in a conventional sense.”

The past 17 years have also seen the economy go from boom to bust. “The boom years brought with them an increased demand for particular types of drugs”, and with it turf wars over drug distribution.

The bust has influenced criminality through increases in illicit tobacco and laundered fuel sales.

Since the economic crash extortion and debt collecting is “thriving”, Corcoran adds. Another byproduct of the financial crisis for the bureau is the increased difficulty it now faces in the disposal of seized assets.

The scarcity of disposable income and the desperate state of the property market makes it more difficult to recoup money for the exchequer.

The bureau has attracted some criticism for an apparent lack of convictions for white-collar crime but, Corcoran says, “I don’t share some of the commentary that’s made from time to time” on the issue.

“There are very often comparisons made with the US and places like that; people quote cases like Bernie Madoff. Those comparisons are not legitimate and are not made by people who understand the differences between the two jurisdictions. There are vast differences in the legal systems.”

Resources
In terms of resources, Corcoran says he is reasonably content with what he has at his disposal. It is a relatively small outfit, however – made up of about 70 staff with an annual budget of €6 million to €7 million.

The bureau currently has about 350 cases on its books. This means operations have to be efficient.

There are about 150 specially trained Garda profilers in the various divisions around the State. They conduct lifestyle analyses of criminals and make recommendations to the bureau on that basis.

The bureau targets assets rather than individuals but, in spite of this, cases are not prioritised in terms of monetary value but by the degree of risk posed by individuals concerned.

Corcoran says the ultimate aim of the bureau is to be “part and parcel of every serious investigation that takes place”.