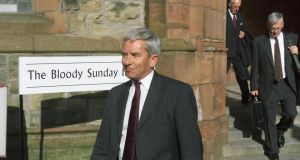 The death last Saturday of retired British army officer Edward Loden – murdered by intruders at his son’s home in Nairobi – means that we may never fully know how or on whose instructions the initial cover-up of the Bloody Sunday killings was organised. We do know that, on the basis of the evidence in the public domain, the two soldiers most intimately involved were Loden and Michael Jackson, who was subsequently to rise through the ranks to become Britain’s top soldier, the chief of the general staff.

Jackson was a captain and second in command of the first battalion of the Parachute Regiment in the Bogside on the day. Loden was a major and commander of the battalion’s support company, the unit which fired all the fatal shots. The fact that the chairman of the Bloody Sunday tribunal, Lord Saville, accepted the account of their roles which eventually emerged from the two men’s evidence was crucial in allowing David Cameron to make the much-praised Commons statement in which he hailed the report and declared the massacre “unjustified and unjustifiable”.

Difficult to denounce
Had Saville cast doubt on the Loden/Jackson narrative, Cameron would have found it difficult to denounce those who had fired the fatal shots while maintaining that no stain attached to the British army generally. The Bloody Sunday issue could not have been disposed of in a way that satisfied the needs of the British political and military authorities.

Jackson had just recently been appointed chief of staff when he came to give evidence in London in April 2003. He said that although he had been in the Bogside and in the vicinity of the shooting, he had seen little of what happened. He made no mention of compiling a list of the shots fired or of writing any other description of events. A different version emerged the following month when Loden described how, late in the afternoon of Bloody Sunday, he had taken statements from the shooters and plotted map references showing in each case the location of the shooter and of his target. He said that he had interviewed the soldiers one by one as he sat in the back of an armoured vehicle with a map spread out on his lap and by the light of a battery-powered lamp. He listed 14 “engagements”.

But when the original of the “Loden list” was produced, it turned out to be not in Loden’s but in Jackson’s handwriting. How could this have come about? “Well, I cannot answer that question,” Loden replied.

None of the shots described in the list conformed to any of the shots which evidence told had actually been fired. Some trajectories took bullets through brick buildings. In their evidence, none of the soldiers said to have been debriefed by Loden recalled this happening.

Other documents in Jackson’s handwriting came to light – personal diaries of the day by Wilford, the three para company commanders and the battalion intelligence officer. The transcription of this dossier of documents must have been a lengthy and wearying exercise.

Recalled to the stand in October 2003, Jackson said that he had had no memory of any of this when first giving evidence but had recovered a “vague memory” after learning that the documents had subsequently been produced and put to Loden. Under questioning, the chief of staff seemed hampered by poor memory, on more than 20 occasions using phrases along the lines, “I cannot remember,” “I do not recall,” “I have only a very vague memory.”

Saville accepted both Loden’s original claim that he had personally written out the shot-list and Jackson’s subsequent explanation that he must have copied out by hand both Loden’s list and the other documents, although he could offer no explanation of why he might have done this or on whose orders. No original of Loden’s list has ever been found.

In volume eight of the report, Saville rejected suggestions from the families’ lawyers that “the list played some part in a cover-up to conceal the emerging truth that some innocent civilians had been shot and killed by soldiers of 1 Para, although it is not explained exactly how this conspiracy is said to have worked”.

After the massacre
Saville went on to cite an interview on BBC on the day after the massacre in which a British army spokesman used the list as his basis for explaining the “shooting engagements”. The report also acknowledged that the shot-list had been distributed to British diplomatic missions around the world by British Information Services as the “official” account of the killings.

Saville did not refer in his report to the possibility that here we had not just evidence of a conspiracy to cover up the truth of “unjustified and unjustifiable” killings of unarmed civil rights demonstrators but clear sight of the conspiracy in action, with Jackson and Loden at its heart.

It is widely assumed that the Bloody Sunday matter is over and done with. But it isn’t.