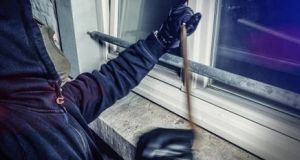 An average of just over 1,500 burglaries were recorded each month in 2017, with a total of nearly 18,500 for the full year. Photograph: Getty Images

Burglary rates across the State remained close to record lows in 2017 despite concerns generated over recent high-profile cases. A number of elderly or vulnerable people were assaulted during break-ins in 2017. This resulted in much public debate about the wider burglary problem, and the ability of the Garda to respond.

However, figures obtained by The Irish Times show the burglary rates last year remained close to the record lows they had reached in 2016. An average of just over 1,500 burglaries were recorded each month in 2017, with a total of nearly 18,500 for the full year.

The figures show burglaries increased by about 3 per cent last year, having fallen by 30 per cent to a record low in 2016. The burglary rates of the past two years are the lowest for decades.

Garda sources said the fact the 2017 figures were broadly in line with the record lows of the previous year had come as a relief in Garda Headquarters at Phoenix Park.

There was concern among senior Garda officers last year after burglary rates increased in October, when 1,863 were recorded. Informed sources said that spike was a two-year monthly high. And coming as it did while the Garda was involved in a clampdown on burglars, senior officers were worried. However, the surge of October was not sustained. Some 1,742 burglaries were recorded in November, and 1,424 in December.

The data for the last three months of 2017 was released by the Garda this week, It was intended to show the impact of the Garda’s “Lock Up, Light Up” winter campaign urging the public to secure their properties.

While releasing the data for the last quarter of the year showing a falling burglary rate in the period, the Garda declined to release the full-year figures.

A Garda spokesman said the Central Statistics Office (CSO) was responsible for publishing annual crime data, and would release 2017 figures in time for all crime types.

The CSO suspended the publication of any new crime data last year after errors with the homicide figures were unearthed. However, crime data for the 15-year period between 2003 and 2016 remains on the CSO website. It shows the number of burglaries recorded in 2016 was significantly lower than at any time during the 15-year period.

And the provisional burglary figures obtained by The Irish Times from Garda sources reveals the 2017 burglary rate was the second lowest annual figure since 2003.

The CSO’s compilation of crime figures only goes back to 2003. Prior to that the Garda compiled and released its own data. Garda annual reports show burglaries at more than 30,000 annually during the 1990s.

A fresh phase of Operation Thor, launched in late 2015, targeted prolific burglars. It also focussed on groups using the motorway network to commit break-ins and then flee the scene. That operation helped secure a 30 per cent decrease in burglaries in 2016.

Those falls were largely sustained in the first months of last year, according to sources, until an increase began for several months, spiking in October. However, the same Garda sources said October had proven an anomaly when judged in the context of the full year.