Videos on social media of a packed Dublin bar have gone viral and the Licensed Vintners Association has called for the "business to be shut down immediately." Video: Twitter/ @antoon619 & as credited 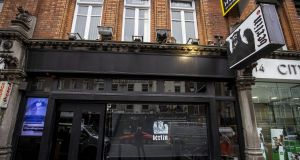 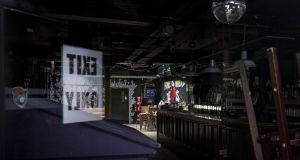 Neither the owners nor staff at the Berlin D2 bar in Dublin can be prosecuted for the scenes witnessed on the premises last weekend as they broke no laws and were not in breach of any Covid19 public health regulations, according to Garda sources.

Video emerged of people dancing in the pub on Dame Lane in Dublin’s south inner city as a member of staff stood on the bar and poured the contents of a bottle down the necks of several people.

While the footage led to controversy, Garda sources have told The Irish Times no laws or regulations were broken.

Businessman Jay Bourke is among a number of people with a stake in the business and he has been in contact with gardaí about the incident. However neither he, nor any of the staff, committed any offence that might result in a Garda investigation, according to informed sources.

Officers at Pearse Street Garda station are expected to review the business and once that review was completed a decision would be taken on potentially objecting to the renewal of its liquor licence in September.

Garda sources said the company’s full record, not just the footage that emerged last weekend, would be considered when the pub was being reviewed ahead of its annual liquor licencing application.

Mr Bourke has already said he reviewed CCTV footage recorded inside the bar during the Baked Brunch event, explaining the short clips of video that emerged did not reflect the way the full event had unfolded.

“Unfortunately at about 3.50pm one of my barmen decided to jump up on the bar and pour some whiskey into four people’s mouths and someone took a video of it,” he said.

Mr Bourke added the event was not “wild” or overcrowded, saying it was limited to 51 people and that the venue was clean and sterilised with Covid-19-related precautions in place. While the barman had behaved in a “naughty” manner, Mr Bourke did not believe any regulations had been breached.

Garda sources said having reviewed the video they had reached the same conclusion as the owner and nothing arose that necessitated a prosecution.

At present restaurants have been allowed to re-open as well as pubs that serve food. Gardaí have been inspecting pubs for almost two months to ensure a meal costing at least €9 was being served to drinkers and that social distancing measures were in place.

Those measures are guidelines that publicans have been asked to follow rather than regulations they must follow. And because the Government decided the measures should be advisory rather than “penal”, gardaí have no enforcement power.

They have no power to close a pub on the spot and have no other enforcement powers at their disposal to take action against pubs.

Under long-standing legislation, which predates the Covid-19 pandemic, if gardaí find any workplace environment they believe poses a health risk they can inform the Health and Safety Authority. It has the power to apply to the courts for a business closure order.