Belfast trial: Paddy Jackson ‘last person in the world who would rape someone’ 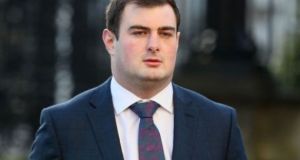 Rory Harrison is accused of attempting to cover up the alleged rape of a woman. Photograph: Brian Lawless/PA

Rory Harrison, who is accused of covering up the alleged rape of a woman by Ireland and Ulster rugby player Paddy Jackson, has said he believes the complainant was upset that night “because Paddy had rejected her.”

Mr Harrison told the jury he did not believe the woman when she told him she had been raped because “Paddy is the last person in the world who would rape someone.”

Mr Jackson and his Ireland and Ulster teammate Stuart Olding are accused of raping a 19-year-old Belfast student at a party in Mr Jackson’s home after a night out in June 2016. A fourth man, Blane McIlroy, is accused of exposing himself to the woman directly after the alleged rape.

Mr Harrison is accused of perverting the course of justice by misleading police. He is also alleged to have deleted text messages relating to the incident which were sent over the following days.

After taking the stand on Saturday morning, Mr Harrison told his own counsel Gavan Duffy QC that he would often notice people looking at Mr Jackson “because he’s recognisable and he’s famous.”

He said he noticed the complainant was staring at him “a bit longer than most people would especially since he was in the house and she knew he was there.”

Mr Harrison recalled deciding to leave the party and going upstairs to say goodbye to Mr Jackson. He said he saw the complainant on the stairs and walked past her to get to Mr Jackson’s bedroom door.

He said he did not notice her state of dress but remembers that she was clothed.

Mr Harrison said he leant into the room and saw Mr Jackson in bed naked. He said goodbye and Mr Jackson “sort of just grumbled at me and said ‘I’ll see you later.’”

He opened the door of another room to say goodbye to Mr Olding and Mr McIlroy. In the room he saw Mr Olding and a female party-guest asleep on the sofa, fully clothed.

“I thought there had possibly been some sort of sexual activity because they had left the room toghether and were sleeping in the same room.”

He decided against going to look for Mr McIlroy because he assumed Mr Jackson’s young niece was probably asleep in the house. Mr Harrison said he went back downstairs and into the living room.

A short time later the complainant came into the living room, he said. Asked if he observed anything about her, he said she “just seemed a bit quiet” and “a little bit upset.”

He denied the woman’s account that she ran out of the house and he ran after her.

Mr Harrison said he told her he would bring her home and she agreed. They went out and got a taxi.

He said that in the car the woman was “definitely a bit more upset, she was crying at this stage.”

He said he did not remember a call he made to Mr McIlroy from the taxi which lasted more than two minutes. He agreed he could, as per the taxi driver’s earlier evidence, have told his friend he was leaving the woman home but denied speaking “in code”.

He remembers walking the woman up her driveway and later sending her a message stating, “keep the chin up, you wonderful young woma”n.

He told counsel he had absolutely no idea why the woman was upset but thought it might have been because she had been rejected by Mr Jackson. He said he did not think she had been a victim of rape at that time.

“She was clearly upset and I was just trying to be nice to her.”

The woman responded, thanking him for dropping him home and saying “you’ve been far too kind.”

He sent her a song he had been listening to. He denied this was an “attempt to cover up or to manage this girl”.

His counsel asked him about a later message he received from Mr McIlroy reading: “What the f-k was going on. Last night was hilarious.” Mr Harrison said this was in response to him putting a photo on Facebook of him and Northern Ireland footballer Will Grigg outside Ollie’s nightclub.

He said he assumed Mr McIlroy’s message was referring to the Northern Ireland football team being out that night.

Mr Harrison confirmed he is not a member of the “Jacome” or “the Juicers” WhatsApp groups. The jury has previously heard these are groups in which the other accused boasted about their sexual activity the night before.

Counsel asked about a message from Mr Harrison to Mr McIlroy stating the woman was “in hysterics” when she left the house. He told counsel she wasn’t actually in hysterics, “it was just a turn of phrase.”

That day the woman texted Mr Harrison stating, “what happened last night was not consensual.” He responded “Jesus.”

Mr Harrison said he was initially shocked but then thought about it and realised, “Paddy is the last person in the world who would rape someone.”

He said he thought the woman had “probably done something and regretted it.” He did not take the message seriously, he said.

Counsel asked him about a message he sent stating, “mate the scenes last night were hilarious.”

He denied this was referring to the rape and sexual assault of a woman. He said it referred to the Northern Ireland football team being out and people singing and taking their trousers off.

Asked about his message stating, “walked upstairs and there were more flutes than the Twelft of July.”

He said he sent this because he presumed Mr Jackson had engaged in sexual activity with the complainant and Mr Olding had done the same with the woman on the sofa. He said he would never make such a joke if he thought a woman had been raped.

Asked about short phone calls to his co-accused that morning, Mr Harrison denied their purpose was to plan a cover-up.

That day they met at the Soul Food cafe for lunch. He said it is a small restaurant with tables close together. It would not be the place to have a private conversation, he said.

There was no discussion about the complainant not consenting to a sexual act, he said. He did not tell Mr Jackson about her message to him.

Asked why, he said: “Because I didn’t believe it. I didn’t want to worry him with something that I had absolutely no faith was true.”

Mr Harrison said he left after about 20 or 25 minutes. He met the accused later that day at the Two Taps bar. There was no discussion of the encounter there either.

The next day, on June 29th, he went to the funeral of a family friend. That night he went to the bar Filthy McNasty’s to meet Mr Jackson and Mr Olding. They had a fair amount to drink and were in good form, he said.

They went on to a nightclub before going back to a house-party with people they had met out. He stayed overnight there before being collected by Mr Jackson the next day.

The three men then went to Town Square to get brunch. Mr Harrison said while there, Mr Olding and Mr Jackson received phone calls from Ulster Rugby telling them the police were looking for them.

“They looked fairly shocked and surprised as the call went on.”

After the call Mr Jackson and Mr Olding were trying to figure out why the police wanted to speak to them. Mr Harrison said it didn’t occur to him it might have been about the complainant.

Mr Harrison went home and planned later to go for dinner with his family as it was his birthday.

He was woken at 3pm by his sister who said the police were downstairs. The police told him they were investigating an assault and asked for his account of the party in Mr Jackson’s house.

He said he answered all the questions to the best of his ability. He denied lying or holding anything back.

Mr Harrison confirmed his father is a solicitor but said he did not consult with him before talking to the police.

By that stage he believed the investigation probably related to the complainant. After giving his statement, he contacted Mr McIlroy to tell him to expect a call from police.

He agreed he told Mr McIlroy to leave his phone at home when he went to the police station. Counsel asked if this was an attempt to impede the investigation or engage in a cover-up.

Mr Harrison denied this and said he told Mr McIlroy to leave his phone at home because he knew police often seized phones and it can be very inconvenient.

Man fails in attempt to be released from custody on bail