Associate of ‘the Monk’ shot dead in gangland-style attack

Gardaí say Noel Duggan ambushed outside his Ratoath home, had been under surveillance 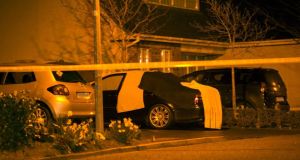 The scene of the shooting in Ratoath, Co Meath.

Gardaí believe a man shot dead in a gangland-style attack in Co Meath last night was the latest victim of a worsening feud that claimed two lives in Dublin last month.

Noel Duggan (55) was ambushed as he sat in his car outside his home in The Old Mill housing estate in Ratoath at approximately 7.45pm.

Garda sources said while the inquiry into his murder was still only beginning, it appeared the attack was well planned.

They said it appeared the killers had Duggan under surveillance and were familiar with his movements.

Duggan made one of the largest settlements with the Criminal Assets Bureau and was a key player in the lucrative cigarette smuggling trade which flourished during the recession.

He had a very close personal relationship with Gerry Hutch, the suspected armed robber also known as the Monk.

Gardai believe Duggan was targeted by Dublin-based members of the organised crime gang led from Spain by Dubliner Christy Kinahan because he was so closely linked to Hutch.

Gary Hutch, who was once a member of the Kinahan gang, was accused of being a police informer by his associates and was shot dead in Spain last September.

Last month some of his associates stormed into the Regency Hotel in Drumcondra, north Dublin, where they knew members of the Kinahan gang would be gathered for a boxing tournament weigh-in.

Three days later Eddie Hutch (58) - a taxi driver uncle of Gary Hutch and the brother of Gerry Hutch - was shot dead at his home in Dublin’s north inner city.

Hutch’s murder was regarded as revenge for the Regency Hotel attack, even though Eddie Hutch was not involved in organised crime.

Last night gardaí sealed off the scene of the shooting in Ratoath and Duggan’s body remained at the site pending the arrival of a pathologist to carry out a preliminary examination before removal for a postmortem.

Gardai were trying to establish if two cars found on fire in the area were used by the attackers to get to and from the scene of the killing.

Independent councillor for Ratoath Nick Killian said the Old Mill housing estate where the dead man lived with his family for the past 15 years is a quiet cul de sac and residents “are in shock and disbelief” following the shooting.

“It is unfortunate that gangland activity has been visited on the community in Ratoath but it should not be seen as a reflection on the area,” he said.

“It is part of a wider culture of criminal activity.”