Attempt to prosecute John Downey caused confusion over his status 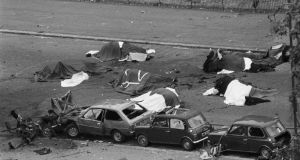 Dead horses lie covered adjacent to wrecked cars at the scene of an IRA car bombing when the Household Cavalry was passing, in Hyde Park, London, in 1982. Photograph: PA

John Downey had no more reasons for concern than any other airline passenger as he was on his way to catch a connecting flight to Greece at Gatwick Airport on a Sunday afternoon last May.

Moments later, however, he was stopped by police. A check was made on the police computer against his name, which declared he was suspected of having been one of the IRA team that set off a 25lb car bomb in Hyde Park in 1982.

The bomb, wrapped with nails and placed inside a Morris Marina, had killed four of 16 Blues and Royals military horsemen as they passed on their way to Buckingham Palace. Seven horses were killed, or had to be put down.

Downey’s arrest caused days of confusion and consternation, since he had been one of nearly 200 IRA so-called On the Runs told in 2007 that they were no longer wanted for prosecution.

Letters of comfort
In a statement to Mr Justice Sweeney in the Old Bailey, who heard Downey’s challenge to the bid to prosecute him, Sinn Féin’s Gerry Kelly said the letters of comfort had been “essential” to the peace process.

Sinn Féin scented conspiracy in the days after Downey’s arrest, talking darkly about forces in the British establishment.

The 2007 letter of comfort had given Downey confidence to travel to Britain and Northern Ireland from his Donegal home repeatedly.

In 2010, he travelled three times to Britain, in February, March and April. In 2011, he went twice, in April and November. In January 2013 he went again – “all without incident”, Mr Justice Sweeney noted.

In 2012 he attended Sinn Féin’s hunger strike commemorations in Dungiven, Co Derry, while he twice went to Corrymeela Peace Centre meetings in Belfast.

Privately, however, British security forces were equally taken aback by Downey’s arrest, which came on the back of a 20-year-old record in the police computer, rather than because of any new interest in him.

Instead, the PSNI had said in 2007 that Downey was not wanted for prosecution, but, for inexplicable reasons, they had failed to warn him that he was still wanted by the Metropolitan Police for the Hyde Park bombing.

Matched a photofit
Downey had quickly been suspected for that bombing, particularly because he matched a photofit prepared by witness, Mark Chrusciel, who had spotted the IRA men as they prepared days before.

Some of his fingerprints were found on two parking tickets given out when the Marina was parked in London; first in Portman Square and then in Kensington two days before the bombing.

The Garda, who had taken Downey’s fingerprints in 1980, had “informally supplied” copies to the RUC and the Metropolitan Police, Mr Justice Sweeney noted in his ruling.

Later, the Garda gave the Metropolitan Police a photograph of Downey that they believed matched the Chrusciel photofit, but it could not be published because it would endanger a source.

A photofit was made from the photograph. Two witnesses, Robert Day and Phyllis McGowan, who had noticed the Marina days before the bombing, both said it was one of the bombers. Later, a Garda officer visiting New Scotland Yard said the same.

Seven years after the bombing, in November, 1989, then attorney general Sir Patrick Mayhew QC met with senior law and police officers to decide on Downey’s case.

The fingerprint evidence would be admissible, they believed, but there were doubts a jury would accept in the aftermath of the Guildford Four and Maguire Seven cases that he was criminally involved because he had driven a car two days before the explosion.

“Ultimately, the attorney general concluded, and everyone else at the meeting agreed, that the case was not one in which it would be appropriate to seek extradition,” Mr Justice Sweeney records.

In July 2004, an internal PSNI document recorded that Downey was wanted for questioning for up to five Northern Ireland incidents, including a 1972 Enniskillen bombing that killed two UDR soldiers.

The on the runs issue had vexed politicians for years. British prime minister Tony Blair told Sinn Féin’s Gerry Adams in 2005 that he would resolve the issue “before I leave office”.

In March 2006, the Northern Ireland Office wrote to Gerry Kelly, saying Downey was one of three men who would face arrest and questioning if they returned to the North.

Less than a year later, however, Operation Rapid was set up by the PSNI, with officers deciding that Downey should be listed as “not wanted by the PSNI at that time”, the officer handling the case noted.

“To date, no record of any request for clarification has been found,” noted Mr Justice Sweeney in his ruling, which is not to be challenged by the Crown Prosecution Service.