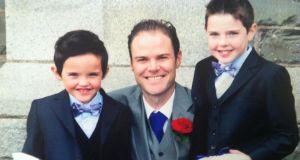 Stephen Carroll pictured with his sons Keelan (left) and Senan. 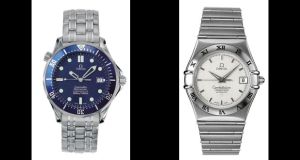 The stolen watches. On the left the Omega Seamaster which is engraved with the message: ‘Senan, Love Daddy x’. The other watch, an Omega Constellation carries the enscription: ‘Keelan, Love Daddy x’.

Thieves who stole engraved watches left by a dying father in Co Louth to his two young sons have been asked to “to give them back”.

They were specially engraved by Stephen Carroll (38) for his sons the week before he died in November.

“They are the only tangible gift Stephen left for his eldest sons and they are just heart-broken that they have been stolen,” said Mr Carroll’s sister-in-law Kerrie Carroll.

The Omega watches have little or no monetary value, according to his family.

His family has appealed to the thieves to “give them back.

Drop them to a church, to the gardai or leave them somewhere they will be found but just give them back. There will be no questions asked.”

According to his sister-in-law when Mr Carroll diagnosed with kidney cancer 18 months, he spent a lot of time thinking about special momentos to leave for his beloved children.

“He wanted to leave something for the boys to have and they were to each be given a watch when they too reach 21,” explained Kerrie.

Mr Carroll died last November but “lived long enough to see the engraving. It was what he wanted. He wanted to have the engraving done and he thought a long time about it” said Kerrie.

Mr Carroll and his family run the well known Carroll newsagents and Hallmark shops in Dundalk, Drogheda, Monaghan and Navan.

Mr Carroll is from Blackrock, Co Louth and the watches were being kept by his parents Ian and Anita in their family home in Blackrock.

They were away from the house and last Friday thieves forced their way in.

“We are all devastated that this has happened. The watches have no resale value at all because of the unique engravings on them. To us they have sentimental value that we could not put a price on. This is very hard on all of the family especially coming so soon after Stephen’s death,” added Kerrie.

She said: “We are hoping that someone, somewhere has a conscience and returns these watches to an utterly devastated family. These were the only tangible memories we have of him.”

The family is using the media, to highlight details of the watches in case they are offered for sale.

Gardai in Blackrock are investigating the theft.