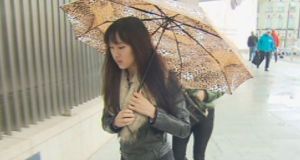 Sphanie Ng leaving the Central Criminal Court in Dublin last year after a teenager was sentenced to 11 years for her attempted murder. Photograph: Courtesy of RTÉ News

A teenage boy who tried to murder a woman he met on an internet dating app will serve a further two years detention before his 11-year sentence is reviewed, following an appeal by the Director of Public Prosecutions.

The Court of Appeal on Wednesday increased the teenager’s sentence review date by two years to seven years, after finding that the original five-year term was too lenient.

President of the Court of Appeal Mr Justice George Birmingham said that increasing the sentence beyond 11 years would not be appropriate having regard to the significant mitigating factors in the case but there was merit in the review mechanism as it gave the boy “a target to work towards”.

“The review mechanism offers what is best for society and is best served to protect society,” he added.

The judge said the three-judge panel was conscious of the fact that the DPP had succeeded in the application and this must be a source of deep disappointment to the boy, which he may not find easy to cope with.

The now 17-year-old, who cannot be named because he is a minor, was originally sentenced by Mr Justice Michael White at the Central Criminal Court to 11 years detention with a review to commence after five years on January 1, 2023. The teenager has been in custody since December 26, 2017 after he lured Stephanie Ng to an isolated area at the Sea Front, Queen’s Road, Dun Laoghaire.

After pleading guilty to her attempted murder, the teenager received his sentence in November 2019.

The DPP successfully sought a review of the teenager’s sentence on the grounds that it was “unduly lenient”, arguing that a review of the 11-year sentence imposed on the teenage boy after a five-year period was too early. The Court of Appeal found that the element of planning and premeditation meant that, ‘even as attempted murders go’, the offence had to be seen as being at the high end of the spectrum.

The father of the teenage boy apologised on Tuesday to the victim before the three-judge panel and said: “There is no excuse for the terrible actions our son carried out that day”.

The man told the Court of Appeal that he regretted his son not being hospitalised or being given the correct medication at an earlier stage. The father said he wished he hadn’t allowed his son to have such a high dose of antidepressants, which he gave the boy every night and which he felt may have induced the manic episode during which he attacked the victim.

The father said the attack was not unpredictable and his son had previously attempted to commit suicide “to avoid attacking people”.

The teenager met his 25-year-old victim on the Whisper social media app, where he had pretended to be 19. The boy was 15 years old when he tried to kill Ms Ng during their first face-to-face meeting on December 23rd 2017, after suggesting they take a selfie by the water’s edge in Dun Laoghaire. There, he grabbed her from behind and choked her to unconsciousness before slashing her neck with a knife.

Gardaí later found a book of drawings in his bedroom, containing a sketch of someone being cut up with a knife. The words, ‘serial killer’, had been written on another page.

His victim previously gave evidence in March 2019 of taking what she thought was her last breath, as the teenager she met online tried to ‘choke the life’ out of her before leaving her for dead. She later felt that he was frustrated with himself for not having killed her. Through tears, she told the Central Criminal Court that the boy had ‘destroyed’ her life.

The boy was accompanied to court on Wednesday by two members of staff from Oberstown Children Detention Campus and his parents sat in the body of the courtroom.

Earlier this month, the Court of Appeal found the sentence imposed on the teenager was too lenient. The three-judge panel concluded that the sentence was simply inadequate, and “while obviously the product of great care and attention, it did not adequately meet the enormity of the offending behaviour”.

Giving judgment in the three-judge court on Wednesday, Mr Justice Birmingham said the Court had concluded on July 2 that the review date had failed to reflect the gravity of the offending and many factors were present in the case which meant that the offence had to be regarded at the upper end of the spectrum. The aggravating factors in the case included the planning and pre-meditation of the offence, luring the victim to the location, the violence of the attack and the very significant consequences this had for the victim who was very fortunate to survive, he said.

Mr Justice Birmingham highlighted that the sentencing judge, Mr Justice White, had been exceptionally careful and conscientious when constructing the boy’s sentence. “The Director has not taken any issue with the headline or pre-mitigation sentence,” he continued.

The judge said significant factors were present by way of mitigation including the youth of the offender, the absence of any previous convictions, the manner in which he met the case and followed up with an early guilty plea as well as his significant mental health difficulties.

He said these factors had reduced the original sentence from 17-and-a-half years to 11 years and a reduction of this order was appropriate and did not involve any error. “Had the trial judge imposed a sentence of 11 years simpliciter [without conditions], it is unlikely that this court would have been minded to intervene,” he remarked.

Mr Justice Birmingham said for the court’s part they did see merit in the review mechanism as it offered the best prospect of a managed and guided reintroduction of the boy back into society. “The existence of a review date means there is a target for the young respondent to work towards. The review mechanism offers what is best for society and is best served to protect society,” he said.

On the review date in January 2025, the judge said there would be a number of options open to the judge such as suspending the balance of the sentence served from that point or into the future.

He said a supplementary report had been provided from consultant forensic psychiatrist Dr Richard Church as well as a report from Oberstown Children Detention Campus, which was “broadly positive”. “It appears the respondent has done well there,” he indicated.

Mr Justice Birmingham said it seemed that Dr Church had not changed his opinion regarding the boy’s diagnosis and the risk he posed. “He remains of the view that he is at risk of developing a psychotic mental illness and remains at high risk of serious self harm and suicide. The opportunity to prepare and carry out violent acts increases his immediacy of harm to others and these factors can be managed within the current custodial environment,” the judge said.

The judge said this was a difficult case and there were no easy solutions. “No outcome is entirely straightforward but making provision for a review is the least worst option,” he said.

He said the review had taken place at too early a stage and increasing the sentence beyond 11 years would not be appropriate having regard to the significant mitigating factors in the case.

Mr Justice Birmingham, sitting with Mr Justice Patrick McCarthy and Ms Justice Isobel Kennedy then resentenced the teenager to 11 years detention with a review after seven years on January 1, 2025. He added that it was realistic to envisage that the review process would take three months.

Following this, Patrick Gageby SC with Niall Nolan BL, for the boy, asked for the review to be in the Central Criminal Court. Furthermore, Mr Gageby said that Mr Justice Paul McDermott had presided over a number of juvenile cases in the last few years and had indicated in these cases that reports should be made available from the governor of the prison as well as probation and psychiatric services on a two year basis. He asked the court to make the recommendation in this case so that when 2025 comes about “there is a good history”.

In conclusion, Mr Justice Birmingham said: “We provide that the matter is listed for review on the date specified before the presiding judge in the Central Criminal Court and that reports provided by counsel be prepared on a two year basis with the first report two years from now.”

The judge finally extended his appreciation to Dr Church, who he said had produced a report against a tight deadline.

In seeking a review of sentence at the “undue leniency” hearing on May 14, counsel for the DPP, Anne-Marie Lawlor SC with Garret Baker BL, submitted to the Court of Appeal that a review of the sentence imposed on the teenage boy after a five-year period was too early.

“I say that the minimum time he must spend in custody cannot be five years,” she argued. Ms Lawlor said that one could not quibble with the sentencing judge’s view that the headline sentence was one of life.

In reply, Mr Gageby for the boy, said there was no expectation of release after five years. “The learned trial judge is very experienced in juvenile matters and, in the last few years, we’ve all done more juvenile cases than … in the past 30 years,” he noted.

1 ‘It was pitch black’ - Rescued teenager describes night afloat with her cousin in Galway Bay
2 Inside the O’Brien Fine Foods factory in lockdown Kildare
3 A million trees, including 400,000 oaks, to be destroyed this week
4 Schools urged not to demand clean uniforms each day
5 Garda killer Aaron Brady will be almost 60 by time he leaves prison
Real news has value SUBSCRIBE