Analysis: Kinahan gang went out of sight and out of mind 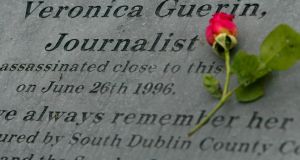 In the two decades since the murder of crime journalist Veronica Guerin, the control centres of Dublin’s criminal gangs have moved abroad. Photograph: Collins

When Richard Nixon visited Beijing in 1972, the Chinese premier Zhou Enlai was asked for his view on the impact of the French Revolution. He replied that it was “too early to say”. But sometimes one does not need to wait centuries to assess the consequences of events.

It is now two decades since crime journalist Veronica Guerin was murdered by the John Gilligan gang and the Criminal Assets Bureau (Cab was established to bring down the then emerging organised gangs.

But it is only now, with the fresh round of violence in the so-called Kinahan-Hutch feud, that we can say for certain how Guerin’s murder changed the criminal justice landscape.

And the conclusion is not encouraging.

In a nutshell, the clever gang leaders ran from the reach of Cab and set up business abroad, mostly on Spain’s Costa del Sol and in Amsterdam.

The biggest of them is now the Kinahan gang. It has grown to a size and level of power never before seen in the Irish underworld.

But in Spain, where the police forces are trying to contain some of the biggest organised crime syndicates in the world, the Kinahan gang has not been a priority. And because its members are not Spanish and they are – mostly – not killing people, they have not made themselves a priority for the local police.

In Ireland they have been out of sight.

And while they have not been out of the Garda’s mind, the force – like its Spanish counterparts – has simply had to prioritise domestic gangland issues in the 15 years Dubliner Christy Kinahan’s empire in the sun has been growing.

to sell it and other drugs – resulted in a level of gun killings unknown before the economy expanded and disposable incomes for drugs rose from the late 1990s onwards.

Dead, or in jail, are most of the criminals involved in the Limerick feud, the Westies criminal collective in west Dublin, the Crumlin-Drimnagh feud in Dublin, and the killing spree by the Finglas gang led at first by Martin Hyland and, after his murder, by Eamon Dunne, who has also since been murdered.

There has also been protracted gun feuding in Coolock in north Dublin and dissident republicans have clashed with Dublin’s major gangs with resultant murders.

In some years since the turn of the millennium there have been in excess of 20 gun murders on the streets of the Republic, very many of them gang-related and each requiring huge Garda resources to solve.

All the while the Kinahan gang was shipping vast quantities of drugs into the Irish underworld, virtually all of which was working for it.

And now 15 years since they upped sticks to the Marbella region, Kinahan and his Irish partners in crime have grown into a “huge crime conglomerate”, in the words of Assistant Garda Commissioner John O’Mahony.

And because they are based abroad and have all their cash and other assets there, they are out of the reach of the Cab. Its creation after the Guerin murder made them flee. And in exile they have flourished – a policing priority in neither their native nor adopted lands.

Two decades on, that’s what we know.