Air-rage accused does not accept he caused flight diversion 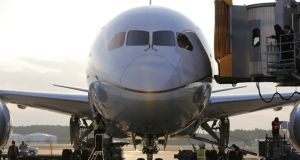 Jeremiah Mathis Thede, from California, has appeared before Antrim Magistrates’ Court charged with endangering the safety of a United Airlines aircraft, disruptive behaviour on board and common assault. File photograph: Toru Hanai/Reuters

An American man charged over an alleged air rage incident does not accept responsibility for the costly diversion of a transatlantic flight, a court has heard.

The United Airlines plane was en route from Rome to Chicago on June 20th last when the captain made the decision to touch down at Belfast International Airport after concerns were raised about the man by cabin crew and other passengers.

Jeremiah Mathis Thede, from California, appeared before Antrim Magistrates’ Court charged with endangering the safety of the aircraft, disruptive behaviour on board and common assault.

Defence barrister Aaron Thompson described the high-profile case as “novel” and said his client was “not even aware” of common assault as an offence.

It is claimed the plane had to dump 50,000 litres of fuel before making the unscheduled stop.

As the crew would have exceeded their legal flying hours if the aircraft had resumed the journey straight away, 282 passengers were forced to wait almost 24 hours before the jet could take off again, with many having to sleep on the terminal floor.

Diverting the aircraft was a decision for the pilot, Deputy District Judge Sean O’Hare was told.

“These are all decisions taken by the flight crew,” said Mr Thompson. “The pilot takes a decision to divert at a large cost.”

Dressed in dark trousers with a loose white shirt and carrying a bag, Mr Thede, with closely cropped dark hair, stood beside his lawyer in the public gallery as it was decided the case should proceed to a higher court.

The 42-year-old, from Berkeley, spoke several times during the brief hearing to confirm he did not wish to give evidence or call witnesses at this stage.

Mr Thede, who has spent time in custody, is already significantly out of pocket as a result of having to stay in Northern Ireland for the case, the court heard.

Releasing Mr Thede on his own bail of £500 (€680), the judge said novel areas of law would have to be explored.

He told Mr Thede’s defence team: “You will have to look carefully.”

The case was adjourned until October 14th.

Judge O’Hare said: “It is in your interest to be back at this court on that date.”

Outside, Mr Thede declined to comment and shielded his face from a camera.