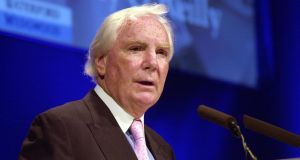 One-time billionaire businessman Dr Anthony O’Reilly, now being sued by Allied Irish Banks for €22m, told the bank earlier this month he had disposed of assets valued at more than US $150m since 2011 and used all of the proceeds to reduce borrowings.

AIB alleges only €307,737 of the US$150m was used to discharge its debt and the €307,737 represented the sale proceeds of a property owned by Mr O’Reilly which the bank requested be sold.

Mr O’Reilly has told AIB he would sell his entire Castlemartin estate in Co Kildare consisting of “circa 750 acres of the finest stud land in Ireland”; had put on the market Shorecliffe House mews, cottage and other buildings and adjoining lands and lands; and would agree a programme for disposal of certain shares in Independent News & Media on which AIB’s debt was secured.

His unencmubered assets include a shareholding in Fitzwilton Ltd controlled by Gilhome Ltd and he said he would discuss with the other shareholder the issue of a sale of part or all of the company, according to documents put before the court. Other unencumbered asets included a cottage outside Castelmartin; two pensions of €1m each, of which only one could be cashed; and contents, valued at between €500,000 to €1m, of houses owned by him.

A church on the Castlemartin estate including a graveyard where his parents and two grandchildren are buried had been excluded for that reason from security given to banks but would be included in the Castlemartin sale, it was stated.

State-owned AIB has brought proceedings seeking summary judgment for €22m against Mr O’Reilly, Lissadell, Lyford Cay, Nassau, Bahamas; and for €18.6m and €4.1m against two of his investment vehicles, Indexia Holdings and Brookside Invstments Ltd, after expressing dissatisfaction with proposals to clear those debts.

Brookside owns Mr O’Reilly’s estate in Glandore, Co Cork, while Indexia holds his near 5 per cent stake in Independent News & Media and share of Providence Resources.

Despite lengthy negotiations from 2010, the defendants failed to make any substantial commitment to repay those facilities and Mr O’Reilly’s representative Bernard Somers had advised on May 14th €2m cash was not available to make an upfront payment in partial reduction of the debt, as AIB had demanded, the bank said.

AIB had demanded repayment by 4pm on May 12th and at 8.30am that morning Mr Somers sought a meeting which was held at 11am when Mr Somers was asked to set out written proposals for repayment. At 4.44pm, AIB said it got “vague” proposals to sell some assets. It extended the deadline to 1pm on May 13th and at 2.27pm got a proposed timeline for disposal of some assets.

AIB gave until 1pm May 14th to expand on the proposals. It said a futher proposal was unacceptable but offered to defer proceedings if €2m was paid upfront and the defendants agreed to take immediate steps to dispose of assets. Mr Somers said the defendants could not comply with that.

After granting AIB’s application today to fast-track the case in the Comemrcial Court, Mr Justice Peter Kelly asked Bernard Dunleavy, for the defendants, to outline any defence that may be offered.

Mr Dunleavy said his side accepted the monies were borrowed and repayable and had agreed with AIB the case would be fast-tracked but then adjourned for a brief period. There may be an opportunity to bring some matters to the attention of the court that may persuade it “the normal order” should not be made, counsel said.

Michael Collins SC, for AIB, said the bank considered the case urgent but was prepared to allow a short time to the defendants. He said “every possible opportunity” had been afforded to reach an accommodation. The loans were outstanding since 2010 and 2012 and there had been two standstill agreements and negotiations but proceedings were initiated because no satisfactory proposals had been advanced. The matter has to be “brought to a head”.

The judge said the normal practise was to outline the nature of any defence to be advanced but Mr Dunleavy had not indicated any such defence. However, given the bank’s agreement, he would adjourn the application to June 23rd.

The proceedings arise from loans made to Mr O’Reilly on dates from March 2009 to fund personal investments, repay a director’s loan and refinance an existing loan. The loans were repayable on dates in 2010 and 2012.

AIB said it was in regular communication with the defendants from 2010 when the repayment date for the first of the facilities expired. It said representations were made proceeds of realisations from interests held by the defendants in various companies would be used to pay down AIB’s debt but these did not have the anticipated yields. In March 2013, Mr O’Reilly advised any pre-emptive move by AIB would not be in anyone’s interest.

Two standstill agreements were reached, the second expiring in late 2013. AIB called a final meeting on April 15th last when it advised Mr Somers realistic proposals were required, plus a large up-front cash payment or it would take enforcement action.