A pillar of the nation-building project

The State’s early judiciary were a docile lot, but time and 1960s activism helped the Supreme Court roar 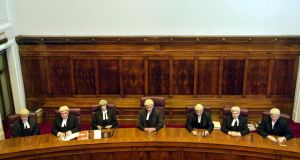 Supreme Court judges at an appeal by the State against a landmark decision in favour of Kathryn Sinnot and her son Jamie, who has autistm, in 2001. It was the first time seven Supreme Court judges had assembled to determine a constitutional issue. From left: Hugh Geoghegan, John Murray, Susan Denham, the then chief justice Ronan Keane, Frank Murphy, Adrian Hardiman and Nial Fennelly. Photograph: Bryan O’Brien

It has played a key role in helping to shape modern Ireland but the Supreme Court was slow to find its voice. After the foundation of the State, the judiciary comprised a generation of men who had trained as barristers and worked as judges under the old British system of parliamentary supremacy, where judges simply had to apply whatever the legislature decreed.

Even after the 1937 Constitution gave judges the right to strike down legislation, it was a largely docile judiciary who would occasionally complain about legislation but never felt they could flex their muscles and do anything about it.

A turning point came in 1961, when the then taoiseach, Seán Lemass, made two significant judicial appointments, sending Brian Walsh to the Supreme Court and elevating Cearbhall Ó Dálaigh to the position of chief justice.

Lemass had a chat with each of them on their appointment and indicated openly to them that he would like the Supreme Court to be “more like the United States Supreme Court”. In other words, that it would be more creative in its interpretation of the Constitution.

So began an era of judicial activism, starting with the seminal case of Ryan v Attorney General. In 1965, Gladys Ryan took a case against the fluoridation of the water supply, objecting that the State was interfering with her ability to determine what her family could drink. Ryan lost the case but, significantly, the Supreme Court accepted her argument that she had a right to bodily integrity, which is not mentioned in the Constitution.

“In other words, the judges were accepting that there was a corpus of unenumerated, or implied, rights that they could identify and that these rights could be used to strike down legislation,” says Prof Gerard Whyte of Trinity College Dublin.

Over more than a decade, the Supreme Court went on to identify implied rights to privacy, work and travel. One of its landmark judgments came in the 1974 case of McGee v Attorney General. The court, by a four to one majority, recognised that there was a right to marital privacy and by extension that the ban on the importation of contraception was unconstitutional.

In the Attorney General v O’Callaghan case in 1966, the court ruled that a person could not be denied bail on the grounds that he or she might commit further offences while at liberty.

The judges put limits on ministerial discretion and found that the State could be held liable for the acts and omissions of its servants, thereby throwing out the common-law doctrine of State immunity.

There was more at work here than simply the expansionist inclinations of two men. It was the 1960s, the era of Lemass and the reform agenda, and change was in the air. In Washington, the supreme court was widening its interpretation of the US constitution. Similar moves were afoot elsewhere in the world.

“There was that spirit around in the late 1960s and early 1970s,” says Prof Brice Dickson of Queen’s University Belfast, “which seemed to facilitate activism by national supreme courts.”

In time, Government’s patience with the Ó Dálaigh court wore thin. Politicians and civil servants resented its incursions into what they felt was Government terrain. They grew suspicious of its overactivity and, what they saw as innovatory zeal. Ministers were particularly alarmed by the O’Callaghan bail case.

So, when the position of chief justice became vacant in 1972, the Fianna Fáil government appointed William Fitzgerald, a man they felt had a more limited view of the court’s role. A long reaction against judicial activism duly set in on the court.