Pricewatch: ‘€75 of missed payments had me on credit barred list for the next five years’ 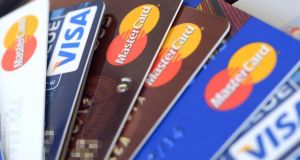 ’Our whole future has just evaporated, no hope of us coming back to Ireland in any near future’

We received an email from a woman who was clearly in a state of some distress when she wrote it and fearful that a small financial misstep had cost her and her family their future. She made her concerns clear in the subject field of the mail: “Our future has just vanished.”

She and her husband have been living overseas for several years and left good jobs in Dublin for opportunities abroad that “afforded us to move up the career ladder in senior positions within our industry”.

She admits to being “very naive about finance” and says that when she left Ireland she “did a terrible job at tying up loose ends, and didn’t change my address from my rental property in Dublin to my ‘home’ address. Mea culpa”.

We would imagine this is a common enough mistake, particularly among younger people who move overseas soon after they finish their education.

So, this reader had a credit card, one she had had since her student days and she “had finally got on top of before it I left. I haven’t used it in over three years and thought it was paid off”, she continues.

It wasn’t and just before she had written to us she had checked he online banking. “My husband and I still have joint savings of 30K in Ireland and it was then that I realised that some of the credit card loan was still outstanding and I had missed some payments to the tune of just under €75 earlier this year. I paid the card off in full straight away once online.”

She immediately phoned her bank but the news was not good. “I was told that due to the fact that they couldn’t contact me, this €75 of missed payments had put me on the credit barred list with all lenders in Ireland for the next five years. The bank said that they can’t do anything once I am on that list.

“Our whole future has just evaporated, no hope of us coming back to Ireland in any near future which is just devastating because we’re expecting our first baby. I’ve just been constantly crying since I found out and can’t believe I’ve been so stupid. I’ve screwed over my husband’s future, my unborn child’s future and cannot come back to the country I love because of this minor error in the grand scheme of things.”

She asked if we had any advice and concluded her email with the words: “I’m just absolutely drained and devastated and have no idea what to do now.”

We contacted her immediately and the first piece of advice we had was not to panic. We checked with several brokers and bankers who specialise in mortgages and they confirmed that while the missed payments are a black mark and could well have an impact on future borrowing it is not the end of the road.

Yes, the missed payments will see her name appear on the central credit register for a period but that does not automatically mean she will be barred from borrowing to buy a home for the next five years. The amount is very small and the circumstances are very understandable. She also has good job and a lot of savings. These things count for a lot in the grand scheme of things and the bottom line is banks are in the business of making money off loans and while the bank connected to the missed payment may turn its nose up at her in the future, another bank will be more inclined to look at her application, particularly if she had her husband tick all the other boxes.

We suggested that when she does come home a good mortgage broker should be able to sort things out for her, and we reminded her that even in the worst of all scenarios – a scenario which would see her denied a mortgage over this indiscretion – we are not talking about forever. Five years is not long passing.