Nutella safely delivers the goods, but a luxury spread from Carlow had us begging for more 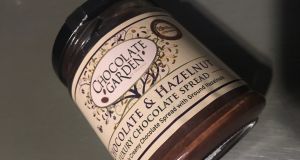 Chocolate Garden: “Make no mistake, this is a luxury product. It also happens to be the best chocolate spread that we have ever tasted.” 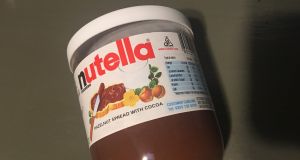 Nutella: “The hazelnut flavour is pleasingly strong, and while the chocolate spread is very thick, it spreads easily enough.” 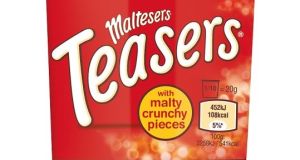 Maltesers: “It was far too sweet for our tastes and did not spread as easily as we would have liked.” 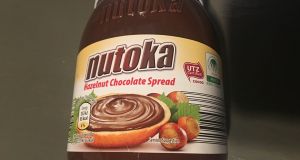 Nutoka: “It is very creamy and perfectly pleasant, even if it lacks the strong nutty flavours we found elsewhere.”

Nutella
€1.50 for 200g, €6 per kg
When it comes to chocolatey spreads, this brand is by far the runaway market leader – not only in Ireland but across Europe – and it did not get to such a position by being bad. So it isn’t. The hazelnut flavour in the mix is pleasingly strong, and while the chocolate spread is very thick, it spreads easily enough. The jar doubles up as a glass when it’s empty, so could have a long and happy life as long as you remember not to put it out with the recycling. It’s widely available, utterly reliable and pretty cheap.
Verdict: Reliable
Star rating: * * *

Chocolate Garden
€4.50 for 195g, €23.07 per kg
Unlike Nutella, this is a brand we were completely unfamiliar with. It is made by a small Irish company, The Chocolate Garden of Ireland, based in Tullow, Co Carlow. They are in the business of making what the jar tells is are “luxury chocolate spread”. And make no mistake, this is a luxury product. It also happens to be the best chocolate spread that we have ever tasted. The chocolate has that lovely combination of bitter and sweet, and we loved the fact that the mix contained tiny pieces of hazelnut, which had a lovely crunch to them. They abundance of nuts (43 per cent) and the high-quality chocolate (25 per cent) give this product a pleasingly complex and rounded flavour. We are not joking when we say that this is the kind of chocolate spread you could sit on the couch and spoon into your mouth until it’s all gone. (It’s not like that we did that, though. No sirree Bob.) Availability will be a problem for some; we found it in a Fresh outlet in Smithfield. Affordability is also likely to be an issue.

Nutoka
€1.99 for 450g, €4.42 per kg
On many levels, this is the polar opposite of the Chocolate Garden product, with the most obvious difference being price: it is substantially cheaper than the high-end option. We trialled this with a number of small people, all of whom loved it. It is very creamy and perfectly pleasant, even if it lacks the strong nutty flavours we found elsewhere. It has a much more spreadable texture than any of the competition and its attaches itself to toast with great ease. It lacks luxurious qualities, but it is a whole lot more affordable.
Verdict: Very good
Star rating: ****

Maltesers Chocolate Spread
€2 for 200g, €10 for 1kg
We are quite partial to Maltesers, so were quite pleased when we saw this selling in our local Tesco. It let us down. We knew there’d be no hazelnuts in the mix – they have been replaced by the honeycombed biscuit found in Maltesers. Still, we missed them all the same, and their absence deprived the product of any claims to wholesomeness. It was far too sweet for our tastes and did not spread as easily as we would have liked. Ultimately, it felt like we were eating smushed-up Maltesers smeared all over our toast, which is not as nice as it might sound.
Verdict: Disappointing
Star rating: * *