4,000 passengers passed through Dublin airport on Sunday, up 800 people on Saturday 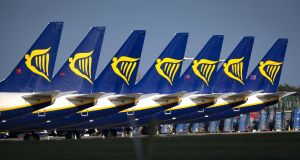 Ryanair, which has continued to operate a small number of flights between Ireland and the UK throughout the health crisis, will start re-opening more routes in the coming days. Photograph by Crispin Rodwell/The Irish Times

Ryanair has flown its first passenger flight in more than three months from Dublin to Milan in northern Italy.

It’s understood the flight, which departed from Dublin airport at 6pm on Monday, was the first Italian-bound flight since the airline suspended all international flights in and out of Italy in mid-March.

While the flight’s destination is described as Milan, the airport used by Ryanair is in the city of Bergamo, about 50km northeast of Milan and one of the worst affected areas in Italy during the coronavirus pandemic.

The Milan flight was scheduled to return on Monday night, arriving into Dublin airport at 11.30pm.

Ryanair, which has continued to operate a small number of flights between Ireland and the UK throughout the health crisis, will start re-opening more routes in the coming days.

Aer Lingus, which has also continued to operate a reduced schedule of flights to European and north American destinations, is scheduled to fly to Amsterdam, London, Chicago and New York on Tuesday.

Neither Aer Lingus nor Ryanair responded to a request for comment on their plans for re-opening routes over the coming days.

Some 4,000 inbound and outbound passengers passed through Dublin airport on Sunday, up 800 people on Saturday. However, the number of people passing through the airport is still down 97 per cent on June 21st 2019 when 115,000 passengers flew in and out.

A Dublin Airport Authority (DAA) spokesman confirmed that passenger numbers had “increased slightly” in recent days when compared to April when traffic was down by 99 per cent and May when it was down 98 per cent.

DAA has said it is “strongly recommending” that passengers wear face masks and face coverings at all times when inside airport buildings or in car park shuttle buses and says the recommendation applies to both arriving and departing passengers.

Ryanair has previously said it planned to restore 40 per cent of its flight schedules from July 1st including 139 routes from the Republic. The airline has said it will be offering daily flights from countries all over northern Europe, including Ireland, from the start of July.

Ryanair rejected claims last week that it was putting profits above passenger safety and flouting aviation safety guidelines issues by the British authorities. UK guidelines call for airlines to offer a reduced food and drink service and limit the sale of duty-free and other non-essential items. However, Ryanair is continuing to sell food and drink, although it offers only pre-packed items.