'Parents bear the brunt of an underfunded education system' 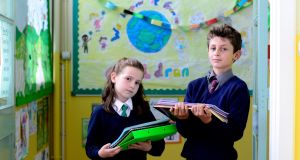 Jayna McCuskey and Mark Ara at St Enda’s School: “It is 50 years since our free education system was made a constitutional obligation and yet still we are seeing parents being told to foot the bill.” Photograph: Cyril Byrne

Almost half the State’s parents with schoolgoing children will not be able to afford other bills or daily essentials once all the education costs that will fall due in the weeks ahead are covered, a new study has revealed.

The annual Barnardos School Costs survey published on Wednesday morning found that parents “are bearing the brunt of an underfunded education system” despite a well-publicised circular sent to all schools by the Minister for Education in April calling on them take a more proactive approach in reducing the burden of costs on parents.

According to the survey, parents with children in senior infants will spend an average of €95 on clothes, with clothes for fourth-class children climbing to €105 and to €190 for those entering secondary school. Shoes for primary school children have an average price of €45 while in secondary school the average climbs to €70.

The survey reveals significant price discrepancies between primary and secondary school books with parents of a child in senior infants set to spend €70 with the sums spent reaching €275 if the child is going into first year.

The average cost of voluntary contribution was €80 for children in senior infants and €150 for a child in secondary school.

The savings associated with such schemes can be significant, with many parents with children in secondary school telling Barnardos researchers that it knocks about €200 each year off the final bill per child.

“What we are seeing in the report is an overriding theme of parents being overburdened by school costs and there is frustration that parents have to prop up an underfunded education system,” Barnardos head of advocacy June Tinsley said.

“Since last year, and despite the circular issued by the Minister for Education in April, there has not been a huge amount of change from a parent’s perspective although we have seen some inroads from a political perspective and more moves towards book-rental schemes,” Ms Tinsley said. “We pointed out last year that all it would take to make education completely free for all children was around €103 million.” However, she added there had been little movement when it comes to increasing the funding for education.

“When he became Taoiseach, Leo Varadkar was very vocal about his aim to eliminate child poverty. Well, funding education is a really tangible way to at least start doing that,” Ms Tinsley said. “It wouldn’t have to happen overnight, it could be phased in. It is worth noting that all that is required to make textbooks completely free for all primary school students is €20 million.”

She pointed out that making moves in that direction would be “a real election winner, because it would benefit so many families all over the State at a very low cost. It’s 50 years since our free education system was made a constitutional obligation and yet still we are seeing parents being told to foot the bill.”

Michelle Metcalfe, from a town just outside Dublin, has two girls who are looking forward to sitting Junior and Leaving Cert exams next year as she looks forward to shelling out about €2,000 to cover the cost of their supposedly free education.

She has done what she can to keep the costs to a minimum but even by shopping around and making sure they get the most out of the uniforms they both need, there are only so many curtains that can be cut.

“We have managed to keep cost of books to a minimum this year and I don’t think they will cost us more than €60 or €70 each but then there are all the hidden costs,” she says. She points to the cost of exam papers and reckons she will spend a total of €60 or €70 per child. “The school headmaster is great and he buys the papers in bulk and gets a good deal but even so they are going to be expensive. Then we have to pay €116 to sit the State exams and that is €116 per child. And my oldest will spend between €25 and €40 on her CAO application and she is very bright and is considering medicine and will sit the HPAT exams for the Royal College of Surgeons. And those past papers are €30 each and we will need four of them.”

“I’m probably looking at around €2,000 in total and I’m a single parent so it’s something I really have to factor in to my yearly budget,” she says. “I’m lucky in that I have a job where I can do overtime so I can earn extra money but it’s still a very stressful time of year and it is a huge burden for families.”

CASE 2: “I WONDER WHY I AM LIVING IN IRELAND WHEN THERE IS FREE EDUCATION IN OTHER COUNTRIES”

Sarah Eustace from Dublin has a six year old going into first class and she is facing a bill of €500 “or maybe even a bit more than that”, she says.

The book rental scheme will cost her about €130 although she points out it includes stationery. He son will need a crested jumper and a “two-tone tracksuit that is only available in one shop”.

There is also an eye-watering voluntary contribution of €250. “I know that is a huge amount of money,” she says. “The school is quite new and has a small number of students and they say they are not getting enough money from the Government to cover their costs. I couldn’t afford to pay it last year,” she says. “I paid it the first year but I simply couldn’t afford it last year and I don’t think I will be able to afford it this year. Of course that makes you feel bad and you do wonder if you are the only one not paying it.”

But there is little she can do if she doesn’t have the money. And she doesn’t . “It is €500 even without the voluntary contribution and with the high cost of renting a home and everything else, it’s just too much. Then there are the workbooks, they are very expensive and can’t be reused so it is just like you’re throwing money away.

She says she is getting to the point “where I wonder why I am living in this country, why am I living in Ireland when there is free education in other countries. And the thing is it is an easy fix for the Government. All it needs to do is recognise the importance of education and prioritise it.”