Pricewatch readers’ queries: Outstanding sum can be retrieved via ‘chargeback’ on Visa card 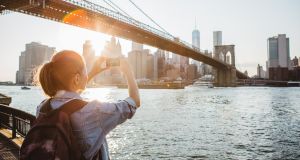 Reader’s daughter worked during college in a hotel “and saved for ages for this trip . . . She is devastated at the loss of her trip and the loss of her hard-earned money”. Photograph: iStock

Caroline Doyle got in touch to see if we could help after Covid-19 cost her daughter her J1 last summer. Like many people, the younger Doyle had arranged her summer in America with USIT Ireland, a company which specialised in US work and related travel programmes. It went out of business in April citing the pandemic as the cause of its collapse.

Caroline said that the bank which issued her daughter with her Visa card was PTSB and she is looking for clarification as to who she should contact – the bank or Visa directly.

“We got in touch initially with PTSB who told her it was nothing to do with them. We’ve been passed from Billy to Jack, and are pretty fed up with this,” she says.

Caroline’s daughter worked during college in a hotel “and saved for ages for this trip . . . she is devastated at the loss of her trip and the loss of her hard-earned money.”

When the Commission for Aviation Regulation told this reader they needed to contact the credit card company, it was referring to a process known as a “chargeback” and perhaps it might have been clearer about what needed to happen.

Chargebacks allow you to ask your card provider – typically the bank that has issued the card and not Visa or Mastercard – to reverse a transaction if there’s a problem with something you’ve bought or paid for or if the company you bought goods or a service from goes out of business without providing that service as is the case in this instance.

It applies to both credit and debit cards although the exact rules may vary between the cards. It has no legal basis but is enshrined in the practices of card suppliers around the world.

The chargeback process is not simple but it does work. The first thing that has to be done is to contact or at least try to contact the supplier – that is not possible in this case.

The next step is to contact the bank, giving details of the transaction and requesting that they follow it up with the supplier’s merchant. This is the bank that processes card transactions for the shop or the company that debited the card.

Banks frequently push back on this but once a bank accepts that it has to deal with the issue, it contacts the merchant’s bank and outlines your concerns and eventually the money should be returned.

There are time limits – 120 days from when the problem become apparent. In this case the clock should not have started ticking when Usit went under but when the regulator said it had done all it could to return as much of the money as possible.

We got in touch with PTSB to make sure it was aware of the rules and to find out why it seemed to be suggesting to our reader that it was an issue between her and Visa.

A spokesman said it was “dealing with a lot of cases such as this and we have been successful in helping a number of customers to recover their funds from the merchant through the Visa Dispute Resolution service”.

He said the template letter sent to customers in cases such as this advises that if your claim with the Commission for Aviation Regulation is declined, PTSB then have a dispute right but not before. “Should your claim (with Commission for Aviation Regulation) be unsuccessful, please forward the letter of decline to us and we can review with a view to raising a dispute (with Visa)”.