It all pans out nicely for this satisfied Tefal customer 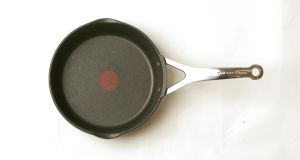 Out of the frying pan . . . Photograph: Alan Betson/The Irish Times

We don’t often get to feature good news stories on this page, so we were delighted last week when we got an email from a reader by the name of Austin Foxe that started with the upbeat phrase, “credit where credit is due”.

Austin had cause to make contact with Tefal in the UK after he noticed that the non-stick coating on his frying pan was peeling off. “They recorded my details and suggested I contact their agent in Cork,” he writes. “This I did and he arranged collection of the pan for inspection.

“In due course the agent agreed that I had an issue and said he would be in touch. Not having heard anything from the agent for a few weeks, I emailed the UK office once more. They were extremely helpful, apologised and said a new pan would be sent out right away.”

The company was as good as its word, and the very next day a brand new frying pan arrived by courier. The only problem was Austin’s new pan was not the same as the one he had returned to the company, so he emailed Tefal again. “Once more they apologised and confirmed that a new saute pan was on the way and that I should keep the frying pan as a gesture of goodwill. Now that is customer service.”

TC Malone was recently in Aldi and bought himself two five-litre containers of sprayable shed and fence treatment – a product he found in the German discounter’s always-eclectic middle aisle. It had a price tag of €6.99 and he was happy enough to pay that price.

However, something irked him once he got to the till.

“As I had them checked through at the checkout, I noticed they were clearly marked £4.99.This is an off-the-wall mark-up in currency conversion, even allowing for VAT variances etc,” he says. “Having complained to Aldi, I received absolutely no satisfactory explanation and was essentially fobbed off. Perhaps you might highlight this price differential and see if they come back with some rationale for the difference,” he adds.

Well, we could certainly try. The first thing we did was check what £5 would buy us in euro. Obviously, currencies fluctuate, but sterling has been pretty weak against the euro for quite some time now, what with all that Brexit business going on, and it has not got either much stronger or much weaker in many, many months.

Based on last Wednesday’s rates, €4.99 equated to €5.78 which is some way off the €6.99 Aldi was charging. That means shoppers in the Republic are paying over 20 per cent more for this product that shoppers in Northern Ireland or the UK.

When we got in touch with Aldi it adopted an “everyone else is doing it so why can’t we” type of approach. A spokesman said: “The difference in retail prices in Ireland and the UK is not specific to Aldi Ireland,” and suggested that there were “several external factors that will lead to a variation between the retail prices of Aldi Ireland and our UK counterparts, including transportation, VAT and excise, labour, commercial rents and energy charges”.

That is a line we have heard many times from many companies and, while there is almost certainly a difference in the cost of doing business here and there, we remain unconvinced it is more than 20 per cent.

Waiting in vain for TescoMobile to send bank verification code

Pat McKenna from Dublin 4 started his mail with a question: “Do readers know that TescoMobile will only transmit verification codes to AIB customers and not to customers of other banks?”

Pat was “amazed and annoyed to discover this” when he tried to enter a new payee on his online bank account. “I couldn’t do so because I needed to enter further verification which was to be sent to me by phone. The verification didn’t arrive. I rang banking by phone and was asked if I had changed my phone. I first replied no, I had my same phone and number, and then I remembered that I had changed to TescoMobile. That was the problem. I complained that Bank of Ireland customers were not routinely told about this. I was asked if I wanted to lodge a complaint. I did.”

Then he rang TescoMobile as was told that the company “blocks verification messages from all banks, other than AIB. As if that made it all right! My bank said verification by post was available, but that didn’t suit my requirements. I think banks should inform their customers of the above before their customers learn the hard way. I also think that TescoMobile might make their policy on this matter known to their customers.”

A spokeswoman for Tesco Mobile Ireland said it “does not block activation texts from banks or other services”. She said the company was making attempts to contact this customer “and would welcome the opportunity to discuss the matter further”. She concluded by saying the company apologised “for any confusion or inconvenience caused”.