When a drunken mammy calls about pricey theatre tickets we listen

Pricewatch: Rosaleen Linehan was horrified by the price her friend paid on Viagogo 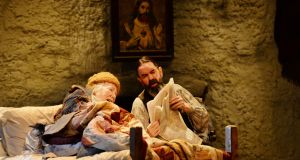 Best seat in the house: Rosaleen Linehan as Mammy and Phelim Drew as Johnnypatteenmike in the Gaiety production of The Cripple of Inishmaan. Photograph: Alan Betson

We have frequently highlighted readers’ concerns about ticket resale platform Viagogo on this page but have never before been contacted by a drunken mammy enraged by how her friend ended up paying through the nose for tickets to see her play.

It happened last week when Rosaleen Linehan, who plays the role of the Drunken Mammy to Johnnypateenmike in The Cripple of Inishmaan by Martin McDonagh, got in touch to express concern about how a friend of hers ended up paying through the nose for tickets on the controversial platform.

Linehan said her friend, Marion Fitzgerald, wanted tickets for herself and her daughter for the play, which has had an extended run in the Gaiety Theatre.

The woman, who is in her mid-80s, went online and was dismayed to see that the play was sold out on the night she wanted to go.

She then saw a link to some tickets and followed it. “She didn’t really know what page she was on but she saw tickets selling for around €120 each,” Linehan told us. “She had already promised her daughter the tickets and the site kept warning her that time was running out for her to buy them at that price so she just hit okay.”

Fitzgerald ended up paying more than €240 on Viagogo for a pair of tickets that would have cost closer to €60 had she bought them on a more regular platform such as Ticketmaster.

“She was horrified at the price and I was pretty horrified by it too and not just because the seats she bought weren’t that great,” Linehan said. “I think it is so unfair that tickets can be sold at that kind of mark-up and that people are put under pressure with the clock counting down to make the purchase.”

Both Linehan and her friend were unfamiliar with Viagogo and the actor asked Pricewatch if we could shed some light on the issue.

Viagogo is a ticket resale platform that – by its own definition – facilitates the resale of tickets to all sorts of events.

However it has come under the spotlight in Ireland and elsewhere for the high prices that sellers using its platform charge – Viagogo takes a cut of each ticket sale – and for a lack of transparency over the course of transactions.

Its days in Ireland might be numbered as Fine Gael TD Noel Rock is in the process of trying to get a Bill through the Dáil which would make the reselling of tickets for more than their face value illegal.

For its part VGL, the company behind Viagogo, has said that any attempt to ban the resale of tickets for major events at above face value prices will be a breach of constitutional rights to own property. Time will tell what happens.

The good news is that Linehan was able to get her friend better tickets to see the play which she enjoyed immensely.

The not so good news is that the money she had spent on Viagogo is gone for good.

It has been a while since we have heard anything about our old friends at Complete Savings. Keen-eyed readers will know we have referred to the self-styled web loyalty scheme many times in the past.

Miriam got in touch last week to say she had only just noticed €15 coming out of her bank account “for the last number of months with the title ‘WRLY complete savings’ on my statement. I knew I didn’t recognise it but naively thought to myself it must be a savings account I forgot I created and there would be a nice little sum adding up somewhere,” she writes.

“I did mean to phone my bank to query it but I never got around to making the call,” she says. Then, last week she got an email.

“We just want to remind you that as a member of Complete Savings, you can get Cash Back automatically at many top online retailers,” it started. “Get CASH BACK every time you shop online,” it said before outlining how the scheme worked and concluding by expressing the “hope that you are enjoying all of the valuable benefits Complete Savings has to offer and we will continue to offer these benefits to you automatically each month unless you contact us. Your €15 monthly membership fee will appear as wly* completesave.ie on your credit or debit statement.”

She recognised the company name straight away and was saddened when she realised there was no little savings account waiting for her. “I do not remember subscribing to this scheme. I do not remember giving my card details,” she says and questions the wisdom of paying €15 for a scheme of this nature. “I have emailed asking for my membership to be cancelled immediately but I am raging to think I’ve allowed this to go on over a number of months.”

This is not the first time we have heard a story like this. In fact, we have received many, many emails about Complete Savings and its relationship with Ticketmaster, Debenhams and other companies. Complete Savings is a self-styled web loyalty scheme that people sign up for – sometimes without being aware that is what they are doing – after they make purchases on partner sites.

What Complete Savings promises is cash back to members if they shop on certain sites. And that is well and good if members, firstly, know they have signed up for the site and, secondly, are happy to have done so.

The difficulty arises when people sign up for the service without being entirely up to speed with what is going on. That appears to be the case in this situation as in many others.

The good news for Miriam is that Complete Savings does tend to be pretty good at issuing refunds once the request comes from the people who have paid the money.