Airbnb says it has ‘permanently removed this bad actor’ from platform 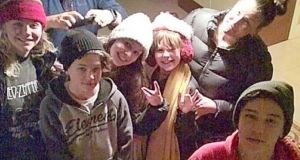 A family that discovered a hidden livestreaming camera while staying at an Airbnb property in Cork said on Friday they “felt a sense of danger” after finding the device.

Airbnb has removed the host permanently from its site after the discovery but Nealie Barker said her family was “very, very upset” with how the tech giant initially handled their complaint.

The family from New Zealand found the camera hidden in a smoke alarm case in the living room of the accommodation just outside Cork city, Ms Barker said in a Facebook post earlier this month, adding that her husband, Andrew, found it after trying to connect his phone to the wifi. He was then able to watch the live stream on his phone.

Speaking to The Irish Times on Friday, Ms Barker said: “We felt a sense of danger in the moment we discovered the camera. It felt like a huge invasion of our privacy and it felt like the exact opposite of what Airbnb should be about -mutual trust.

“We were very, very upset with the outcome of Airbnb’s first investigation. We had to chase them up over weeks until they told us they had exonerated the host and had relisted the property. We could see the property online with no mention of the hidden camera. Airbnb refused to explain to us why they had made that decision and refused to enter into any further discussion.

“Even now, Airbnb have told the media they have banned this listing and host, however they still have not communicated this to us. They have said they are investigation again. They have also told us they will refund the additional costs we incurred as a result of having to stay elsewhere, however as yet, we haven’t seen that money either.

She said Airbnb needs “a very clear no tolerance policy on hidden cameras not mentioned in listings.

“We love Airbnb and want too see the company continue to provide cost effective and interesting travel options to people like us. Almost all of our dealings with other hosts have been wonderful and we don’t want a few bad apples ruining the platform for everyone.”

A spokesman for Airbnb told The Irish Times: “We have permanently removed this bad actor from our platform. Our original handling of this incident did not meet the high standards we set for ourselves, and we have apologised to the family and fully refunded their stay.

“The safety and privacy of our community - both online and offline - is our priority. Airbnb policies strictly prohibit hidden cameras in listings and we take reports of any violations extremely seriously.

“There have been more than 500 million guest arrivals in Airbnb listings to date and negative incidents are incredibly rare.”