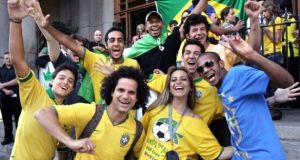 Pablo Santos, an event promoter for Wigwam bar, Dublin, is expecting a large number of Brazil fans for the side’s World Cup opener against Switzerland on Sunday

If you walk past Dublin’s Wigwam bar on Sunday afternoon you will hear a strange blend of electronic samba and the battle cries of Brazilians psyching themselves up for their country’s first World Cup encounter.

Ireland may not be involved, but throughout the country football fever and fans resplendent in face paint and wraparound flags will reflect the island’s growing multiculturalism.

“It’s the most important time for us in four years,” says Brazilian Pablo Santos (26), an event promoter who has been thinking about how to embrace this tournament for the last year.

“It’s funny because [on the first day] for example I was walking around and everybody was doing something different like going to work but in Brazil we would stop everything because the World Cup is on. Even if it’s not our team everyone would stop and watch.”

Pablo’s party begins at 3pm – a music-driven build-up to Brazil’s opening game against Switzerland and he has landed a coup in securing fellow countrymen DJ Tahira and DJ Rodrigo “very famous on the San Paulo scene” and currently touring Europe.

As many as 400 people are expected for the match, a fraction of the near 14,000 Brazilians currently living in Ireland.

“I think everyone is confident, we are always confident that Brazil can be champions,” Pablo says, although he is viscerally aware of the terrible moment in the last World Cup when they were dumped out unceremoniously in a 7 - 1 defeat to Germany.

“It’s actually a forbidden subject. I was talking to someone and they were saying: ‘No! That will never happen again. Don’t talk about it.”

Not far away in a Mount Joy Square basement, Piotr Starska expects his Polish restaurant Sopot to be jammed for his country’s three matches beginning against Senegal on Tuesday and probably reaching a crescendo when they face Colombia the following Sunday.

“It will be very noisy. Massive, massive. Everyone will sing the Polish songs, it will be very exciting,” he says. This is just one small pocket of Polish support – Ireland, according to the 2016 census, has more than 122,000 of their countrymen and women here, more than any other nationality.

They will watch the football drinking Polish beer, eating “bigos”, a mixture of cabbage and sausage, and Russian dumplings with white cheese and meat.

“Honestly Sunday will be double massive because everyone has it off and the game will be on late,” says Piotr. “The Polish community are very confident. We have very good players – like Messi for Argentina, we have Lewandowski for Poland. If he is in good form we will go far. I am very optimistic.”

The World Cup offers a sort of portal into our foreign communities. Collective bands of colourful jerseys, national anthems and flags briefly render them more visible than during day-to-day life. Small communities that normally blend anonymously into larger crowds explode in short bursts of colour and song.

Today, notes Minister for Equality, Immigration and Integration David Stanton, about 12 per cent of Ireland is made up of migrants.

“It’s a huge number and they have enriched the country in so many ways and have added to what we have,” he says at the outset of the World Cup.

“It is something that we can be more aware of if someone’s country is involved. They will be interested in it and [with] friends and neighbours there can be an increasing interest in it.”

On Dublin’s Parnell Street there is a melting-pot of supporters; the Woolshed Baa and Grill is as international as it gets, draped in the world’s colours and home to its hopes and dreams.

The bar is used to this, it shows international football leagues all year round, but this is an opportunity for fusion, a shared experience.

“It’s very good. Obviously it would help if Ireland were in it but that’s only three, possibly four extra busy days. We are still going to be as busy for the other games,” says owner Matt Hudson.

This is far from quiet, if you can squeeze your way in you will find an ever-changing smorgasbord of Scandinavian hotdogs, Mexican micheladas, and Argentine empanadas.

It would be tempting among all this to imagine a picture of abandoned Irish bars with the ghosts of green armies past. But not so, say Irish publicans, who despite the lack of green jerseys can still expect an increase in business.

The Vintners’ Federation of Ireland says its nationwide members are now hoping for a knock-out stage packed with big nations.

“Most customers will have their favourites [teams] and as the tournament progresses interest will mount and I think you will see that reflected in pub attendances,” says chief executive Padraig Cribben.

Donall O’Keeffe, his equivalent at the Licensed Vintners’ Association which represents pubs in Dublin, says the tournament will be a welcome boost in business for traders but nothing compared to what it might be if Ireland had qualified.

“It brings business to us no doubt but it would be a bonanza if Ireland was in it,” he said.

“England is [now] the team that people come to watch and the stronger teams, the ones likely to be contenders.”

Nursing home residents expected to be allowed one visit a week 09:24
Brexit: Negotiators will work hard to avoid sausage ban, says Minister 09:05
Covid-19: Hairdressers, gyms and religious services could return next week 08:21
Vicky Phelan considers move to US for experimental drug trial 07:52
Exiting Level 5: Ministers to push for reopening of shops, restaurants and churches next week 03:53