In the Brand New Retro exhibit, everything old is naff again

‘Most of the ads are so terrible, it’s like Don Draper was never born’ 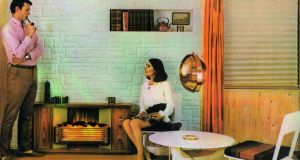 Presenting Herself with a state-of-the-art electric fireplace. 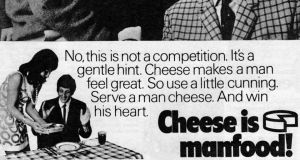 Top tip for enticing and keeping a man. 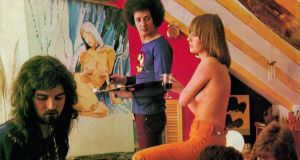 In a corner of the Little Museum of Dublin, a tiny Sony Trinitron colour television plays a showreel of Irish cultural landmarks. There’s Sally O’Brien and the way she might look at you, a youthful Alan Hughes forever coming home to visit mammy, the opening credits of Wanderly Wagon, all kinds of everything from Dana, and a snippet from Murphy’s Micro Quiz-M, in which a star prize is a build-it-yourself mini snooker table.

Talk about going back in time.

The ads that paper the walls of the brilliant Brand New Retro exhibition at the museum on St Stephen’s Green, come from such magazines as Woman’s Way, Magill and Status – “a news magazine for women” edited by Marian Finucane during its short existence in 1981.

There are also pages from Executive, another short-lived attempt to replicate Playboy for the Irish gentleman,with the bare breasts covered up so as to avoid the wrath of God – or at least his emissaries here on Earth, not to mention the Irish censor.

And there are pages from the Holly Bough flogging Tanora. (If you have no Cork connections, that last sentence will likely mean nothing to you.)

The ads are a glorious reflection of Irish consumer life spanning 30 years from the mid-1950s. They show how Bank of Ireland sold chequebooks to women and how Bulmers was sold to everyone: one ad appears to feature a child taking a bottle from the fridge, hopefully to give it to her dad. Black Tower was for the mammies.

There are ads for Butlin’s and Consulate – “the cool cigarette” – and Barbarella nightclub in Dublin. The hot spot’s unique selling point was “water nymphs”: young women made to wear bikinis and splash around in water close to a dancefloor full of morose-looking men in appalling ties and terrible sports coats. At least, if the ads are to believed.

There are ads selling cheese to gents, washing machines to ladies and ads for new potatoes in a can. Yum.

The ads for Dingos jeans really stand out. The very name will see people of a certain age hurtling back in time, Proustian style. The ads are absurd. In one, a group of hip young folk with long hair sit around in a messy flat. One plucks on the strings of a guitar while two others sit on a couch sharing a glass of wine (Black Tower probably).

At the centre of it all is a topless woman wearing flared orange jeans with awesome turn-ups. She’s posing for a nude oil painting.

Most of the ads are so terrible, it’s like Don Draper was never born.

Or maybe they only look dire because we are seeing them through a prism of 21st-century smugness. It is entirely possible that people 40 or 50 years from now will be looking at the advertising of the modern age – the ones we regard as super slick – and marvel at how naff we all were.

The ads may not have aged well, but they do offer a great insight into what the world was like for Irish consumers back then. What we see is a world of contradictions, one that was both innocent and seedy, hopeful and incredibly depressing, and, for women, wildly liberating and absurdly sexist.

It is a world that would be lost to us were it not for curator Brian McMahon.

McMahon has spent much of the past five years digitising hundreds of images from the thousands of magazines he has collected since the 1970s. In the process he has become, almost by accident, one of the most important curators of Ireland’s recent past.

In 2011, McMahon’s father passed away suddenly, prompting him to climb into the family attic in search of family photographs. Along with the family snaps, he found magazines and memorabilia from his youth.

McMahon set about scanning in bits and pieces that appealed to him and put them on his website (brandnewretro.ie). People loved the images. So they became a book and now a museum exhibition.

Virtually every ad in the exhibition is Irish. McMahon has little interest in international brand messages, figuring they can be collected by someone else. Some quintessentially Irish magazines were a treasure trove; others were a disappointment.

“The best sources have always been women’s magazine,” he says. “Woman’s Way was particularly good. Ireland’s Own, on the other hand, wasn’t great. It wasn’t a very visual publication and it was very text-heavy.”

McMahon is the exhibition’s curator, but Simon O’Connor from the Little Museum of Dublin has strived to make it work in the space available.

“We started talking even before the museum opened,” O’Connor says. “But we weren’t really in a position to do anything with Brian’s collection at that time. The real challenge was how to bring something that was working so well online to life in a physical space. We are a very touchy-feely museum.”

So, how to make it touchy-feely? Apart from the posters, there are lots of hard copies of magazines visitors can flick through and there is the television and a working jukebox.

“We’re getting Brendan Boyer’s Hucklebuck in later today,” McMahon says. Most of the 7-inch vinyl records in the belly of the jukebox will resonate with an Irish audience, although there are also some nods to McMahon’s punk roots.

“I think the late ’60s through to the early ’70s was when we had this major social change in Ireland and how we viewed our place in the world,”O’Connor says. “As Pat McCabe said at the exhibition launch, it was like we were going from black and white to colour. Ads are fascinating because they’ve always been a reflection of how people saw themselves, or how they would like to be seen.

“Although, to be honest, the reality of the situation was so different to the ads. Some of the ads point to the liberation of women when that has been a very long time coming.”

According to O’Connor, a museum that deals with contemporary history should be planning for the exhibitions of tomorrow today.

“We should be thinking now about what kind of exhibits are likely to be making it on to the floor 20, 30 or 40 years from now,” he says. “We are so smart now – at least we think we are. But I wonder how this era will be viewed.

As he talks, O’Connor gazes at the ad for Barbarella – it was just off Baggot Street – and its water nymphs.

“I always thought the world of our parents was a very safe and very staid world. Clearly, they were all going out enjoying themselves in a big way.”