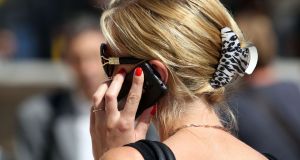 Hundreds of thousands of Irish consumers are missing out on big savings from telecom service providers because they have an “extreme reluctance” to shop around, a study by the Economic and Social Research Institute (ESRI) has found.

The research indicates that as many as 57 per cent of consumers have never switched from one company to another despite the efforts of regulators to encourage shopping around and to make switching easier, with fear and loyalty identified as key reasons for staying put.

Authored by Pete Lunn and Seán Lyons, the study suggests that unless more consumers actively compare offers and consider signing up to better deals, the benefits of competition will be lost and large groups of consumers will end up paying more for a poorer service.

“The persistence of consumer inertia is a potential concern, because these consumers may be left on relatively expensive tariffs or with lower-quality service than consumers who are willing to switch.”

Mr Lunn and Mr Lyons investigated which consumers were more inclined to switch providers of broadband, mobile phone and landline services and looked not only at individual characteristics like age, family structure and income, but at characteristics of the service and how it is used, such as whether it is “bundled” or whether people in the household use smart phones.

“Contrary to the view that there is a special, uniquely vulnerable group of users that is unwilling to search and switch service providers, we find that unwillingness to switch is not confined to particular social groups,” the report says.

People who have been with a company a long time and who have never switched before are, however, exceptionally resistant to shopping around, the report says with 44 per cent of broadband subscribers falling into this category and 57 per cent of mobile telephone users.

For many, a dramatic signal is needed to make switching an option. Signals include the shock of receiving an unexpectedly high bill or learning that savings of over 20 per cent might be on the table. Even in such circumstances there will still be a cohort who remain closed to switching.

The practice of bundling telecoms services does not seem to have had much effect on people’s desire to switch either positively or negatively although the ESRI does suggest that there is evidence that bundling “leads some consumers to keep purchasing a declining service, such as a landline, longer than they otherwise might”.

How a service is used can be influential. People, regardless of age, were more willing to switch mobile provider if they use text messages, the research found, but personal characteristics are “generally quite a weak predictor” of an intention to switch.

“Respondents working in home duties report much lower willingness to switch all three services compared to those in full time employment, but other demographic and socio-economic characteristics have weaker and less consistent relationships with wanting to switch,” it says.

The ESRI believes “a broader approach” is required when studying switching behaviour and suggests there are “competing psychological explanations for this strong unwillingness to switch, including loyalty and worrying about making a mistake”.

It says more research is needed “to discover whether individuals feel different levels of competence in actively choosing telecoms services, perhaps due to their familiarity with the technology or use of services . . .

“Another fruitful approach would be to compare switching preferences directly with later switching behaviour, to see how intentions translate into actions.”