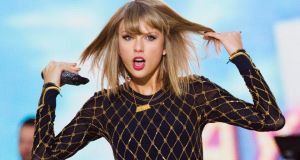 Taylor Swift pulled her entire catalogue off Spotify in 2014, arguing it was unfair some fans could stream her music for less as opposed to buying a physical copy of her album. Photograph: Lucas Jackson/Reuters

Can we have a moment’s silence for all our old record players, tape decks, Walkmans, MP3 players and iPods – all that technology that we once loved that now lies lonely in drawers, attics or landfill.

The physical things that used to play that funky music have been replaced by virtual ones and streaming services have conquered the world and now laugh at the stash of CDs we once had in our glove boxes or scattered around our livingrooms.

From vinyl to cassette and from CDs to digitised ones and zeros, the way we consume music is always changing but the arrival of the iPhone to the market in 2007 changed the game like nothing that went before it and it has allowed digital streaming to change the world of music.

Free streaming applications such as Spotify, Deezer – and the new kid on the block YouTube Music – give consumers unparalleled control and choice at virtually no cost. Premium versions of these services give us access to an endless catalogue of music without ads or interferences. Such services offer similar privileges when it comes to price and content and most allow users to download music so it is accessible even when they are offline.

Spotify is at the top of the streaming hierarchy and has amassed more than 170 million active users, 75 million of which are paying subscribers. Its users have more than 40 million songs available to them. It is – by any measure – excellent value for money from a consumer perspective.

It operates off a two-tier business model. The first tier is free of charge, and supported by advertising. Spotify uses the revenue from advertising to pay royalties to artists. According to a report filed by Spotify in 2017, ad-supported services drove 60 per cent of subscription sign-ups that year.

The second, premium service charges subscribers a monthly flat rate. This service comes with additional benefits such as offline listening and ad-free unlimited streaming. Subscriptions are offered at varying rates – €4.99 for students, €9.99 for a regular subscription, and €14.99 for the family plan.

When Spotify was born in 2006, its model was welcomed by the music industry which had struggled to stay alive in the face of piracy and sites like Napster and Audio Galaxy distributing material for free. But Spotify has since received its fair share of criticism from artists – notably Radiohead, Talking Heads, Beyoncé and Taylor Swift – and the basis that it does not properly compensate them.

Many artists also disagree with Spotify’s “freemium” service, questioning how fair it is that some users can listen to the music for free (provided they can tolerate streaming being interrupted by ads), while others have to pay a fee. What incentive has a fan got to purchase an album when it is available to them for free and legally?

In 2014, Swift famously pulled her entire catalogue off Spotify with Big Machine (Swift’s label) chief executive Scott Borchetta, citing Taylor’s music earning only $496,044 in the 12 months previous as a reason.

She argued that it was unfair for some fans to buy a physical copy of her album, while others could stream it on Spotify for less. She later found herself able to shake off her concerns and rejoined Spotify but kept her newest album, Reputation, off the service during its first week of release. Beyoncé and Jay-Z have followed suit by holding new album, Everything Is Love, from Spotify – for two whole days.

But they are big stars making a lot of money no matter how you look at it. Up-and-coming Irish artists have provided a different narrative although it seems their worlds have moved from traditional concerns of the music business to analytics and click-through rates.

Frontman of Irish indie band Orchid Collective, Shea Tohill, says Spotify has been a fundamental tool in reaching international markets. “Using the Spotify for artists app and our distributor’s dashboard we can get a detailed breakdown of our audience’s analytics. We’re currently sitting at 7,000 listeners a month in Germany with Switzerland and Austria close behind. Ireland is our fourth most popular country for listeners at the moment. We would have had no idea we had a market in these countries before Spotify. I think it’s crucial to achieving a wider fan base as an independent artist in 2018.”

Orchid Collective played 57 shows in Ireland alone in 2017, making their debut UK performance at Y Not Festival and have been featured on BBC One. Popular single, L.A.Z.Y, was released last October and has gained more than 55,000 streams on Spotify alone. Tohill credits Spotify for aiding the band during tour preparation on the eve of their growing success.

“Ireland is a small island in the grand scheme of things and this automatically makes life more difficult as an independent artist. Touring abroad is costly, even to get over to the UK you have to fork out the money for the ferry before you even put your feet on land. The analytics Spotify provides also help us in choosing countries and cities to plan tours in. We now know we have fans in these places instead of just shooting in the dark.”

Newly formed electronic duo from Mullingar, Xo Mo, sing a similar tune. The pair released their new single, Sweat, in April. Like , Xo Mo have been included on the Spotify playlist, The New Éire, next to successful artists like Rejjie Snow and Wyvern Lingo. Spotify shows Xo Mo have listeners in London, Manchester, Bristol, as well as Dublin. Xo Mo attribute Spotify to exposing them to wider markets, leading to new career opportunities.

“We’ve been booked to play some of our favourite festivals as a result, such and Body & Soul, BARE Festival and more which are yet to be announced. Some interesting meetings have also come about which in the long term will be fruitful endeavours. It’s extended our reach beyond our social media.”

When an album is bought in its physical form as a CD or as a record it serves multiple purposes. It gets the music to the fan and it is a way they can show support for their favourite artist in a tangible and monetary way. By buying the CD, the fan contributes to the artist’s success. And it is a way music lovers can curate their sense of identity and belonging among peers with mutual interests.

Streaming is different. A 2015 study, conducted by sociologists Dr Dominik Bartmanski and Dr Ian Woodward, revealed that the digitalisation of music leads to a loss in the perceived sense of ownership and relationship with the music and it is possible that the dematerialisation of music products lessens our sense of identity and relationship with the artists.

With a streaming service, the physical investment and energy that goes into purchasing, collecting, listening and sharing albums is eradicated. You can’t frame your “recently played” section of the app and place it on your wall for all to see. However, researchers have discovered that the option of sharing what you’re listening to on various social media platforms, such as Facebook, gives people the opportunity to showcase their music taste. Or to show it off.

So they find a wider community of users who have a similar interest. Equally, the private session option allows users to hide certain components of their music taste. For example, a person who expresses a keen interest in rock music and has friends with a similar taste may not want their peers seeing that they have been listening to Shake it Off by Taylor Swift after a hard day at the office. It’s not a valid representation of their music taste as a whole – just a small component.

Spotify is not without flaws. But, it allows artists to engage with their fans while reaching new audiences. The exposure that comes with it is essential for smaller, newly-established artists. The platform opens artists up to new opportunities. Additionally, you can show your support to your artists by following them.

You can create public playlists that your friends can follow you on. Your Spotify profile, in some sense, says just as much about you as your Facebook or Instagram profile. In a social-media crazy, quick, on-demand world, Spotify has constructed a service that has become so easily integrated into daily life.

TV guide: 22 of the best shows to watch this week
8