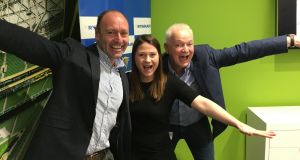 Ryanair has announced it will be flying to nine new destinations from Ireland from October.

However, the company says uncertainty over Brexit remains a serious problem for the future.

From September 2018, tickets for flights after March 2019 will be sold with the caveat that the flight cannot be guaranteed in the event of Britain leaving the EU with no international flight agreement with the union.

At present, the UK has no fallback position if it leave the EU’s Open Skies Agreement, said Ryanair’s chief marketing officer Kenny Jacobs.

“There is no alternative to Open Skies that we have seen, or anyone else has seen – there is no fallback to the WTO [World Trade Organisation], there is no existing other fallback for this, so something brand new has to be created,” said Mr Jacobs.

“We hope it does replicate the existing Open Skies agreement but we, or any other airline, hasn’t seen progress made in coming up with this alternative.”

He said April 1st, 2019 would be the start of Ryanair’s summer 2019 schedule, “which we would traditionally launch in September 2018, and that is post-Brexit”.

“Tickets that we would sell to and from Europe to the UK would be sold with that term and condition that these are subject to the regulatory environment permitting that flight to take place. We are assuming, and we’re hoping, that an alternative to Open Skies is being worked on and will become clear before that.”

From Cork, there will be one new route – to Faro, twice a week.

Knock will also get an extra route – to Bristol, three times a week.

There will be additional flights on 11 other routes from Dublin.

Flights from Shannon will increase including Lanzarote (once a week), Stansted (twice daily) and Krakow (twice weekly).

Three routes from Kerry will increase in frequency – to Frankfurt-Hahn (twice weekly), to Luton (six times a week) and Stansted (four times a week).

The airline predicts it is on course to fly 15.6 million customers per year and says its operations support 11,700 jobs in Dublin, Shannon, Cork, Knock and Kerry airports, with customers spending some €2 billion in Ireland.

Speaking in Dublin on Monday, Mr Jacobs said the average fare would be kept to €39, with almost 30 per cent of revenue coming now from non-ticket sales, including seat allocation fees, baggage charges, and in-flight consumption.

The extra flights will bring in between 350,000 and 400,000 more tourists to Ireland, adding some €200 million to the €1.9 billion Ryanair says its visiting passengers contribute to the tourism and hospitality sector.

Internationally, Ryanair sees itself retaining its position as Europe’s largest carrier, with a 15 per cent market share, said Mr Jacobs.

Ryanair’s chief people officer Eddie Wilson said 80 per cent of Cork and Dublin pilots had individually accepted the company’s union recognition deal and a 20 per cent pay increase, but the union itself had not formally responded.

In the UK, the company had achieved 100 per cent acceptance from pilots and unions to the pay offer. In Spain, 96 per cent of pilots had agreed to it.

“If a union can’t accept a 20 per cent pay increase maybe they need to re-look at how they do collective bargaining,” said Mr Wilson.

The airline was reducing its baggage fee to €25 for bags up to 20kg, but Mr Jacobs said there would be no change to the current random seat allocation system which sees customers on the one booking often allocated seats far apart.