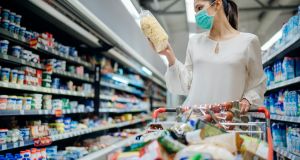 EY report found ‘no significant change in those planning to keep cutting or to stay frugal’. Photograph: iStock

When it is eventually broadcast, RTÉ’s Reeling in the Years for 2020 will be as terrifying as it is depressing, and so long that it will most likely have to be screened over several days – without any breaks.

Since the beginning of the year we have had the formal moment when Brexit (remember that?) became a reality, and Donald Trump became only the third president in US history to be impeached and was subsequently acquitted. Then there was the general election at home which saw Sinn Féin win more support than any other party but not quite enough seats to form any part of a Government. Protracted negotiations saw Fianna Fáil and Fine Gael bury the hatchet somewhere other than each other’s backs after almost 100 years and form a coalition with the resurgent Green Party.

1 Dr Tony Holohan expected to return to his post next week
2 How one couple’s weekend away resulted in 30 Covid-19 cases
3 Gardaí seize €4 million in cash from organised crime group
4 EU formally warns UK of legal action over Brexit deal ‘good faith’ breaches
5 Taoiseach tells TD to ‘cop on’ over criticism of contact tracers asking about pubs
6 Netflix: 10 of the best new shows and films to watch in October
7 House asking prices rebound but will likely fall again - MyHome
8 Two Portobello homes get the designer treatment
9 Chrissy Teigen deserves thanks for sharing the ‘deep pain’ of her pregnancy loss
10 Covid-19: College students on a break and middle-aged people in rural pub linked to large clusters
11 Plans for €2bn Dart expansion lure Bombardier to Dublin
12 Nphet meets but no change to current alert levels expected this week
13 Pharmacist suspended from practising over risk to public health and safety
14 The Comey Rule review: You actually begin to root for Trump
15 Will your boss let you work long-term from home – or from abroad?
16 Council set to abandon €20m Liffey bridge plans
17 City firms move £1.2tn and 7,500 jobs out of London - EY
18 Don’t use Google, don’t use work email, don’t hit ‘accept all’: how to fight for your privacy
19 Google tells workers to return to country where they are employed
20 Champion jockey Oisin Murphy fails drugs test in France
21 Virgin Media unveils new entertainment platform
22 Indecisiveness led to home of The O’Rahilly being demolished
23 St John of God to handover services to HSE due to funding crisis
24 Chris Wallace ‘never dreamt’ debate would go off tracks the way it did
25 Bloody Sunday decision on soldiers shows limits of ‘truth or justice’ model
26 Finn McRedmond: Trump v Biden charade still had some value
27 The far right rises: Its growth as a political force in Ireland
28 How to deal with anxiety from Covid and other events that are outside our control
29 Majority of Ireland’s barristers ‘facing huge drop in income’ during pandemic
30 Trump urges Proud Boys to ‘stand down’ after debate criticism
31 Dave Hannigan: How Christy Ring arose the curiosity of American media
32 Food bank in Dublin’s working-class Bluebell feeding hungry hundreds
33 Pierce Brosnan’s Malibu mansion on the market for $100 million
34 Johnny Sexton captains Leinster against the Dragons
35 Multi-million Anglo write-offs may be impossible to investigate, commission says
36 Pharmacists to be allowed give flu jab in homes and cars
37 Coronavirus out of control in Britain, chief scientific adviser admits
38 Fair Deal nursing home scheme and the family home: how does it work?
39 TV guide: Pros and cons of broadcast television options
40 Subway bread too sweet for the Irish tax authorities
Real news has value SUBSCRIBE