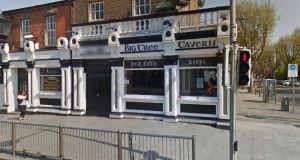 One of north Dublin’s best-known GAA match-day watering holes, the Big Tree, will open for the final time on Sunday ahead of the conversion of its site into a 163-bedroom hotel.

While a pub will operate in the new development, it will be reduced in size from the current Big Tree.

The two-storey buildings surrounding the pub are to be demolished and replaced with a development up to six-storeys high.

The three-storey pub building, located on the corner of Dorset Street and the North Circular Road and which dates from the 1830s, will be retained as part of the development, but an extra storey is to be added to its height.

Permission had been granted earlier this year to redevelop the site as a student accommodation complex, with a similar number of bedrooms.

However, the pub and surrounding buildings were subsequently sold to the Dublin Loft Company, which decided a hotel would be “more appropriate and economically viable at this location”.

Local residents made submissions to the council raising concerns about the “overdevelopment of the site”, the height of the hotel, and the fear the Big Tree would be converted into a “superpub” under the plans. Others put forward the suggestion that the site should be used for housing.

However, the council granted permission, saying that hotel accommodation was acceptable at the site and that “there is no link from the hotel ground floor to the Big Tree tavern which is considered appropriate and to avoid the creation of a potential superpub”.

It added that the size of the proposed hotel was “broadly in line” with the previously permitted student accommodation scheme and the six-storey height was within the limits for the area.

It added that the “low-rise and low-density development of surrounding two-storey residential dwellings is inconsistent with what would be a sustainable form of development for an inner city location”. These houses “cannot realistically determine the building heights of new developments”, it said.

The Big Tree, one of the closest pubs to Croke Park, has only been open on a limited basis in recent months, and will see its final customers on Sunday when Dublin play Tyrone in the All-Ireland senior football final.