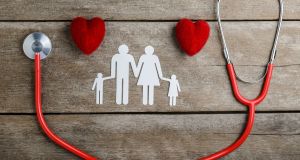 “Since my daughter was born in 2005 with cleft lip and palate, we would have had a very active policy, with ongoing treatments and surgeries.” Photograph: iStock

Covering the cost of health insurance for a family once a year is tough enough for most of us – paying on the double is much harder, as one reader recently discovered.

“I have been having a difficult time with my health insurer,” starts the mail from Anita. She and her family had a policy with company until last August. That was when the policy was due for renewal, so she shopped around.

She cancelled the policy over the phone and switched to another provider. She says she asked the agent at the time if she needed to do anything else and was told no.

“We were away for March and April this year, and when my husband was transferring money from one account to another, I noticed that the original insurer was still debiting €261.94 from our account monthly from last August 2017 until now,” she writes.

She contacted the company on April 16th to let them know they were still taking money despite the policy ending. “I thought this was going to be straight forward and they would refund my money. I was very surprised to be told I still had an active policy, I advised them that this couldn’t be possible as I had cancelled over the phone. They asked me what day last year did I cancel. I said in my renewal period.”

Anita cannot remember “who I spoke to or what day I cancelled the policy. But I do know that I did cancel the policy.”

When she called in April, she says she pointed out that she had not received any new membership card as she would have in previous years. She also received no renewal policy details in the post or by email.

“How was I to know I had an existing policy? They advised me that they don’t do the membership cards any more and they have gone paperless and don’t sent out policy details in the post. The last communication I have was an email last June 2017 to say my renewal was coming up, but no new email with policy details. I would have got a text in the past from them to say thank you for renewing your policy, but no texts either.”

She has had private health insurance for the past 20 years, “and since my daughter was born in 2005 with cleft lip and palate, we would have had a very active policy, with ongoing treatments and surgeries. I asked if there was any activity on this policy, which I didn’t know we had, and she said no. I said that is because I cancelled it and our health needs are now with another provider. It wouldn’t make financial sense to have two health policies providing the same plan running concurrently.

The company agreed , but said it had to follow policies and procedures.

It told her they had checked phone recordings for her mobile, house and husband’s number and they said they could not find a recording for any of those numbers. They said as a gesture of goodwill, they would cancel the policy effective April 16th this year. “I said I didn’t care for this gesture of goodwill as I didn’t have a policy with them to end. They said they would be sending me a final response letter on April 20th, which would outline the final outcome of my complaint.”

She says she believes the company owes her family €2,357.46, covering last August 2017 to April 2018. “To say I’m upset and frustrated is not enough. We are a family that lives from month to month. In hindsight, I should have put the cancellation in writing and not take the word of the agent over the phone, but I have changed phone and electricity suppliers over the phone with no need for cancellation in writing.”

When we contacted the company it was clear it was taking this complaint very seriously. It had trawled weeks of phone records trying to find evidence that Anita’s policy had been cancelled and had come up with nothing. A spokeswoman also made it clear that its staff are told from the first day of training that they must always tell customers cancelling that they need to put the cancellation in writing and stressed that this was as basic an element of the process as asking for a customer’s name. The company said this was an isolated incident that they simply could not explain. They also accepted that it had left our reader in a difficult position financially and were happy to refund her the full premium that she had paid since last August as a one-off gesture of goodwill.

Anita’s story should serve as a reminder of the importance of keeping records and putting things in writing. While we do know the name of the insurance company and have been in contact with them on Anita’s behalf, we have decided not to include it as we believe both they and their customer have been acting in good faith throughout this process and because – by refunding our reader more than €2,000 – the company has now done everything it can to resolve the problem.