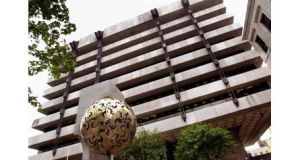 The Government expects Ireland to exit the bailout programme on target this year.

Ireland is confident of beating its budget deficit target this year and emerging from an EU/IMF bailout that it is currently 60 to 70 per cent of the way to exiting, Minister for Finance Michael Noonan, said today.

Mr Noonan said he was "absolutely confident" Ireland would leave the emergency European Union and International Monetary Fund bailout mechanism on schedule at the end of this year but repeated that he needed more help from his colleagues in Europe to ensure that once Ireland is out, "it stays out".

"We're about 60, 70 per cent of the way there if you were marking us on exiting the programme," Mr Noonan told an event at the start of a two-day trip to London, ahead of talks with his British counterpart George Osborne as well as investors.

"We're getting there but we need further arrangements on the sustainability of the debt and we're negotiating those. We're reasonably confident that we will put those arrangements in place and exit the programme."

"I want to make sure (that when we get out) we're out for good, that's why I want to negotiate other pieces of the debt... If something untoward happens in some other European country, in the proximity of Europe, and it drags us back again, I don't want to be in that position."

Ireland and fellow bailout recipient Portugal asked euro zone finance ministers last month to extend the repayment of part of their loans, while the Government also hopes Europe's new rescue fund will take stakes in its almost fully state-owned banking sector off its hands next year if it's permitted to do so.

Dublin also received bi-lateral loans from Britain, Sweden and Denmark as part of its bailout package and Noonan said the maturities on Britain's £3.2 billion (€3.6 billion) loan would be mentioned in his meeting with Mr Osborn, but not pressed hard.

The gap between its revenue and spending in Ireland is now below 8 per cent of gross domestic product last year - still among the highest in Europe - and Mr Noonan said he was confident of beating the 7.5 per cent for this year.

The recent bank debt deal will also ease the deficit path from next year and prompted Mr Noonan and Taoiseach Enda Kenny to promise voters a 20 per cent reduction in the €5.1 billion of austerity measures planned by 2015.

However Mr Noonan cautioned today that it was too soon to say for sure what the leeway would mean for next year's budget.

"To reach our targets we have a billion less to do in terms of expenditure cuts and tax increases, where I will apply that, if I'm finance minister during that period, has still to be decided," he said.

"The billion euro is available to use between now and 2015. For 2014, we're only towards the middle of February and there are so many variables that could occur between now and the end of the year I'm not prepared to predict."