Trees: A crucial lifeline for the climate emergency

One Change: Planting more trees in our cities and countryside is an integral part of ensuring a greener, more sustainable future 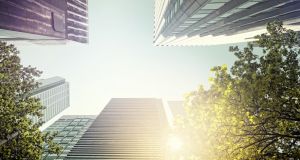 The Irish Government has pledged to plant 440 million trees by 2040.

When a powerful storm hit the west coast of Ireland in March 2014, it unearthed a fascinating assortment of tree stumps near Spiddal, Co Galway.

This “drowned” forest of oak, birch and pine trees was part of an extensive woodland area dating back some 7,500 years – and evidence that Galway Bay was once covered in forests and lagoons.

Last month, a discovery in Greece recalled an even older forest – this time with the fossilised remains of a 20 million-year-old tree trunk; its roots and branches still intact after being preserved in a thick layer of volcanic ash on the island of Lesbos. In 2008, the remnants of the oldest known forest were identified in a quarry in New York, where the fossilised roots were identified as being 386 million years old.

The trees of the ancient past have a curious way of re-emerging in the present, and reminding us of a landscape of old, that was once dominated by woodlands. At one point, Ireland was 80 per cent forests. Now, we have one of the lowest forest coverage in Europe; where the average is 30 per cent, Ireland is at 11 per cent.

Meanwhile, deforestation is still happening at a shocking pace across the globe, in the Amazon, and in countries such as Indonesia, Nigeria and many others.

Planting more trees in our cities and countryside is an integral part of ensuring a greener, more sustainable future. As natural carbon sinks – absorbing carbon from the air – they are a crucial, and relatively low-cost, lifeline in this time of climate emergency. (When billionaire Elon Musk recently announced that he was donating $100 million towards a prize for best carbon capture technology, more than a few people responded on Twitter: a tree?)

The One Trillion Trees initiative, which started in Africa as the Green Belt Movement, has evolved into a worldwide project with the aim of planting, or protecting, a trillion trees by 2030. A nationwide tree-planting effort in Ethiopia in 2019, for example, resulted in 350 million trees being planted in one day. The Irish Government, meanwhile, has pledged to plant 440 million trees by 2040.

Restoring and protecting forests was listed as one of the most popular actions to tackle the climate crisis in a poll of 1.2 million people in 50 countries and published by the UN Development Programme last month. The type of trees we plant and protect, however, is crucial. Native trees such as ash, birch, oak and alder support local ecosystems, helping wildlife thrive – unlike in the many industrially-planted sitka and spruce plantations.

Hometree is an Irish charity facilitating a large range of projects encouraging land regeneration and biodiversity through afforestation.

Catch My Carbon, based in the west of Ireland, also works with individuals and businesses by planting native trees to offset carbon emissions from flying, home heating or driving.

The Pocket Forests movement specialises in planting trees, shrubs and woodland flowers in the smallest, urban spaces. There are plenty of options to get planting trees – a simple, positive gift to the future.

Neven Maguire: A great vegetarian lasagne that cooks beautifully in the slow cooker