Where is the one place in the world you would travel to? 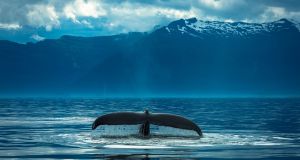 We were quite taken by the suggestion from Penny Petrovski. “To swim with the humpback whales again”. Photograph: Getty

If you were told you had to write a travel bucket list but could only put one destination on it where would it be? What is that one place in the world that you would like to see (or to see again) before time was called forever on your travelling?

When we posted this question on Twitter recently one of the first responses we got was from Bibi Baskin. Instantly she poured cold water on the whole notion. “There can be no bucket lists,” she insisted. “It assumes we know when we’re going to die. Travel now!”

While this is, indeed, sage advice, it was of little use for the purpose of compiling a natty list of travel ideas so we discounted it. And we asked again.

Next up was Miriam O’Callaghan. “Heaven - to chat to a few people I love,” she said. “But I would want to come back home.”

We’re not sure return trips to heaven are an option so - sadly - we had to strike it off our list as well.

After the two broadcasting legends had their say the responses started to pour in and while it would be inaccurate to say there was a runaway winner, one location did get a handful of votes more than any other and it just happened to be was one of the hardest places in the world to get to.

Donal McAlister, Ciara Casserly and Catherine O’Dowd contented themselves with the single word “Antartica” in their responses while Anna Flynn was slightly more expansive with her: “Antartica, or as near as I could get”.

A man who identified himself only as Greg Skerries (not because Skerries is his surname but because he loves the village that he calls home) said he’d put Ushuaia on the list. And where is that you’d be forgiven for asking - largely because we had to ask it ourselves. It is, he explained, the “tip of South America” and the most southerly point of Argentina. What is more “they have a post office end of the pier sticking out towards Antartica. The most southerly post office,” he added.

We’re not entirely sure travelling thousands of miles to visit a post office would be our thing but whatever floats your boat.

There was a lot of love for the world’s colder places with cruises to see the northern lights, visits to the Galapagos Islands, trips to Tromso and general jaunts around the Nordic fiords getting mentions.

“After a lifelong obsession with Dallas, Southfork Ranch please,” said Annette Freeman although she hinted she’d settle for a trip to Texas.

“I would revisit the wonderful Southern States Music Tour of New Orleans, Nashville and Memphis,” Angela Holohan told us while Olivia Trought insisiting on putting two destinations on her bucketlist. Jamaica and St Lucia.

Then she said she’d been to both places.

“The Minister for Finance’s office on the night of the Bank Guarantee,” said Peter Reid.

We liked the sound of Emily Ross’s destination better. “Pushkar, Rajasthan, India. To a crumbling palace by the lake, with the Saddhus practicing yoga at dawn.”

And we were quite taken by the suggestion from Penny Petrovski too. “Sandy Beach resort, Ha’apai, Tonga. To swim with the humpback whales again, and sleep in a room on the beach.”

Now that is something to fantasise about on a cold winter’s night in Ireland.

Hilary Fannin: Will you help send these Irish children back to school?
Real news has value SUBSCRIBE