Cycle series: Views that have to be Sneem 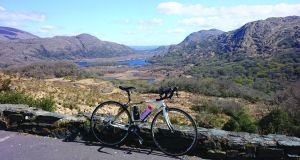 Ladies View, Killarney: one of the incredible views along the route.

This route offers a rewarding opportunity to visit Kenmare and Sneem, two popular and scenic areas on the Ring of Kerry.

There are incredible views along the way including Ladies View, the Black Valley and the Beara Peninsula. Like most rewarding things in life, however, there is a little exertion involved, in this case the matter of Moll’s Gap, which is the gatekeeper for both the outward and return journeys. There are two ascents of the same climb from different approaches, but little in common in terms of views except for the summit.

Leave Torc Waterfall car park and head south-westwards along the N71. For the first few kilometres, the road is rolling and fast; however, it will gradually begin to rise for the first ascent of the day towards Moll’s Gap. The ascent itself is never too steep, with an average gradient of approximately 2 per cent, but it is relatively long and it will be at the 15km mark before Moll’s Gap is reached. Here, there is a cafe that has an impressive upstairs vista of the Black Valley, if a quick break is needed. Take a right at the summit, signposted for Sneem (R568) past Lough Barfinnihy for a welcome descent for the next 10km, enjoying views of Ballaghbeama Pass to your right and the Blackwater area to your left. There is another climb further on, this time a gradual effort for 4km, before the road descends again, reaching Sneem at the 36km mark.

Sneem, as a village, is well worth a stop as it has a number of cafes and shops but there is also a lovely character about the place that can only be appreciated with a meander around, from the bronze statue of Steve ‘The Crusher’ Casey, world champion wrestler and a native of the village, to the main bridge, which overlooks the estuary of the River Sneem as it flows towards the Atlantic. Sneem is the best place on this route to take your main food stop of the day.

Leaving Sneem, head eastwards on the N70 signposted for Kenmare. This road is on the main Ring of Kerry route and is quite well-surfaced. A few kilometres outside Sneem is the Parknasilla Hotel, set amidst woodland, inlets and hidden beaches. It was here the film The Lobster, starring Colin Farrell, was shot in 2014. Continue along the N70, passing over the Blackwater Bridge, which is almost 200 years old. Further down the road lies the village of Templenoe, home to the Spillane brothers, who were famous Gaelic footballers for Kerry in the 1980s. As well as being involved in TV punditry and journalism, Pat Spillane also owns a bar in the village.

You will reach Kenmare after about 63km, arriving at a T-junction where the left-hand road will take you back towards Moll’s Gap along the N71. If you wish to visit Kenmare, take a quick detour to the right. At the meeting point of the Iveragh and Beara peninsulas, Kenmare is a vibrant town with many shops and restaurants. The largest Bronze Age stone circle in the south-west of Ireland is located close to the town. The Brennan brothers, Francis and John, own the five-star Park Hotel in the town as well as starring in the popular TV series At Your Service.

Feel free to get a bit of food here, but be aware that very soon after leaving the town,the ascent to Moll’s Gap begins and it might not feel comfortable to do this on a full stomach; however, something light would be worthwhile.

Leave the T-junction, having taken a left, and almost immediately the second ascent of Moll’s Gap of the day will begin. This approach is a little shorter than the one earlier in the day but is more noticeable in terms of gradient, especially at the point when the landscape opens up before you and you can just make out the gap in the distance above. On reaching the summit, having completed 75km, it will be a great reassurance to know the majority of the day’s labours are behind you. Take a moment to stop here and appreciate the views back down to the Lakes of Killarney, the Black Valley and Muckross, which seem minute in the distance beneath.

Leave Moll’s Gap and head down towards Killarney, with a pleasant descent awaiting you as you roll down to the car park at Torc Waterfall.

The starting point for this route is in Torc Waterfall car park, which is well signposted and located just 5km outside Killarney on the N71 road to Kenmare.

Cycling Kerry – Great Road Routes by Donnacha Clifford and David Elton is published by The Collins Press, €14.99. It is available in all good bookshops and online from collinspress.ie