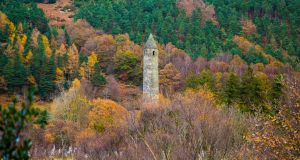 “Forest” may be a rather overblown word for most of our woodlands. Ireland has the sad distinction of being the least forested state in the EU, with only 10 per cent woodland cover. Only one tenth of that lies under diverse native broadleaf trees; the rest is monocultural conifer plantation.

Caoine Cill Cháis, with its haunting lines evoking lost “hazel, holly and berry”, is still sometimes quoted to blame our colonisers as the sole culprits for deforestation. But we have been clearing trees since the Stone Age; and we were still destroying priceless remnants of ancient forests decades after independence.

Happily, public opinion today has a much greater appreciation of the ecological, health and social benefits of native woodlands, and the rich pleasures of walking under varied and seasonally changing woodland canopies.

Thanks to the vision of various individuals, and of NGOs like Crann and Woodlands of Ireland, the NPWS, Coillte and private landowners now run many well-established restoration projects; the range and quality of woodland recreational options is growing once more.

The remarkable ecological and human history of this forest has been exceptionally well researched. It’s well worth reading Deirdre Cunningham’s beautifully informative Brackloon: the Story of an Irish Oak Wood (COFORD), prefaced by Michael Viney, and available online, before visiting.

The native trees had been managed for fuel and timber over many generations, but conifer plantations almost overwhelmed them in the 1960s. Just in time, Coillte reversed gears and has restored native species very successfully – so far. Mosses, lichens and fungi abound. Rare plants include St Dabeoc’s heath and a delicate orchid of damp woodlands, the narrow-leaved helleborine. (Map 38, grid ref L 972 793)

At 300 hectares, this is one of Coillte’s largest restoration projects. It offers varied routes to delight the eye, though some areas are still very obviously in painful transition from plantation to native forest. Clonbur boasts four rare woodland types: those associated with yew, alluvial soils, bogs, and limestone pavement. The latter produces a surprising landscape of spontaneous “bonsai” blackthorn, alder, pine and willow, Zen gardens sculpted by the ecosystem. As Coillte forester Sean Queally says, this is a place of “humungous biological diversity”. (Map 38, M 147 552)

“Forest” is certainly a big stretch here, but the Phoenix Park does offer an astonishing number and variety of small woodlands for a capital city. The Furry Glen is the most distinctive. From Chapelizod gate lodge, you first enter a fine stand of beech, and then equally impressive ranks of Scots pine.

More open areas produce blankets of tasty wild chives; lesser celandine and sometimes coltsfoot stud the grass with gold from midwinter. Mixed woodland slopes to a pond with breeding little grebes, and a sinuous tangle of mossy willows at its head. (Map 43, O 095 353)

The Green Road along the lower lake is surely one of the most vividly attractive forest walks in the country, despite weekend hordes of (other) visitors. Willow, alder and glistening silver birch prosper in the wet bottomlands below the trail. Oak trees somehow find purchase on the steep, dryer slope above it.

The monastic setting lends an ancient atmosphere, but this regenerating forest is actually quite young. The valley had been stripped of trees, for timber, charcoal and mining, by the 19th century. The road leads on up to conifer plantations with some exceptionally fine specimen spruces and firs, above the breathtaking Poulanass waterfall. (Map 56, T 110 964)

The classic walks from Muckross House, especially the remarkable Reenadeena yew forest, are always special. They now also offer some lucky visitors awesome lakeside views of recently reintroduced sea eagles. But to explore the park’s wilder woodland treasures, head off (with map and compass!) from Lord Brandon’s cottage for Looscaunagh (or Dale) wood. Time spent among its ancient mountain oaks can be truly enchanting. You may well wonder, though, why invasive rhododendron, cleared only a decade ago, has been allowed to grow back, jeopardising their future. (Muckross: Map 78, V 969 862; Looscaunagh V 887 819)

Birdsong can be symphonic here. Keen ears have found both garden and grasshopper warblers. There are vast green and cream blankets of ramsons, scenting the air with garlic, and some very pretty patches of hazelwood. But scrawny alien conifer plantations persist in some areas, and derelict buildings near the carpark were distinctly depressing when I last visited, three years ago. However, that sensation was erased by a shoreline walk on linked wooded peninsulas, with panoramic views of Lough Oughter, and constantly shifting perspectives on other parts of the forest across the gleaming water. (Map 34, H 354 054)

We associate the Burren with bare limestone pavement, but the Farming for Conservation Programme has shown that, left ungrazed, the pavement rapidly reverts to hazel scrub. This forms impenetrable thickets when young. So it’s a joy to discover, tucked away under the mountain, a substantial pocket of mature hazel/ash woodland. This reserve is more famous for orchids and archaeology, but the wood is an intricately beautiful emerald treescape, full of open spaces and rich ground flora. Small wonder St Colman MacDuagh built an oratory beside a holy well inside the wood. (Map 51, M 340 039)

This is a great place to enjoy a remnant native oak forest. An ever-changing succession of woodland flowers blooms here from early spring to late summer; there are rare views of an old forest’s cathedral-arch structure in the leafless austerity of winter. The appropriately named Derry river provides a lovely focal point, decked with blossoming mats of water-crowfoot in season. The great oaks remaining, saved from the chainsaw by public outrage in the 1980s, can only hint at the former glory of the once vast Shillelagh Forest. But the drumming of woodpeckers, back after 400 years’ absence, herald some hope for recovery. (Map 62, T 010 690)

If ‘wilderness’ is your thing, you can’t do much better in Ireland than this venerable den of twisted and stunted oaks, draped in a subtropical luxuriance of mosses and ferns, on the shore of Lough Inchaquin. It could be a setting for Game of Thrones. But like all our woodlands, it has been harvested for millennia. The yew tree, to which Uragh refers, has vanished, though stumps turn up in surrounding bogs. That Kerry speciality, the strawberry tree, has been exiled to a nearby island. Overgrazing by deer and goats threaten its regeneration. But it remains quite magical (and hard to access). (Map 85, V 488 563)

This lush valley along the Avonmore River holds some of our largest and oldest native forests. It also extends to the exuberant outdoor laboratory of exotic industrial forestry in the Parnell estate at Avondale, and the well-restored native species in the People’s Millennium Forest at Ballygannon. These woodlands shelter several rare and spectacular animals: the pine marten, the goosander, the great spotted woodpecker, recently arrived, and the red kite, recently reintroduced. The new Avonmore Way has now helpfully linked up an already extensive trail system. (Map 56, T 170 923)