New series: How our offshore islands are fighting depopulation and neglect 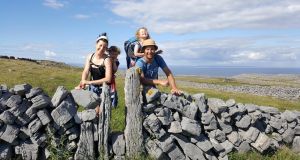 Home for Jenny O’Halloran was once 18,000km away, when she was one of many young Irish emigrants rearing her first-born in New Zealand. Now home feels somewhat different, as she lives 20km by sea from south Connemara, on the largest of the Aran Islands.

Having spent five years living in New Zealand, she noticed a change in atmosphere when she first stepped off the ferry at Cill Rónáin pier two years ago. She and her Kiwi husband David, a marine biologist, had decided to join Blath na Mara, the seaweed business her father Máirtín Ó Conceanainn established on Inis Mór in 2002.

“Here I was, a second-generation islander returning and yet the gentle questions about how I was settling in lasted a good six months and more,” she recalls.

As the weeks and months passed, and she gave birth to their second child, she began to understand the nature of the questions a bit more. Her relatives and neighbours still remembered how her father had left the island and reared his family in Co Waterford.

Inis Mór may be a tourism “poster child”, with all the 21st-century trappings of fast food, parking meters and an ATM, but it is also the limestone landscape of writers Liam O’Flaherty and Máirtín Ó Direáin, where the next meal could have been a currach landing away.

“There is still a strong memory even now of the impact of young people leaving, and so there was a mixture of excitement and almost apprehension on our behalf,” O’Halloran says. “There is a real sense that people care about how we are getting on. That’s not something you get in Avondale in Auckland, or a suburb of Dublin.”

With little crime, no high-rise living, no traffic jams and no city smog, the marketing image is always idyllic, and copywriters can draw on the long line of artists, poets, novelists and film-makers who have been spellbound by the archaeology, language, music and literature.

More than two decades ago, in their introduction to The Book of Aran (Tír Eolas), Anne Korff, JW O’Connell and John Waddell noted that no one would want Aran and its neighbours to become “quaint time capsules”, or “cultural theme parks”. Yet they noted that the very elements required for development, such as improved transport links, could prove to be a magnet for mass tourism, and as such was a “double-edged sword”.

There’s a sense of that already with the Irish language on the Gaeltacht islands. Recent census figures for use of Irish as a daily language of communication outside the school system show it is in decline.

Irish-language activist and academic Donncha Ó hEallaithe notes a fall of 11 per cent in daily use of Irish on the three Aran Islands, Inis Meáin, Inis Mór and Inis Oírr, where the percentage of active daily Irish speakers has fallen from 63 per cent of the population (over three years of age) in 2011 to 57 per cent in 2016. On a positive note, O’Halloran’s husband David was one of 20 pupils at an adult Irish-language class during the past winter on Inis Mór.

The five per cent drop in Irish-language use on Arranmore, Co Donegal, is due to population decrease, Ó hÉallaithe says, and there has been an eight per cent drop on Cape Clear off west Cork. Donegal’s Tory island is the most Irish-speaking island with 75 per cent claiming to use the language on a daily basis outside the schools.

Island populations have never kept pace with population growth levels on the mainland. Dr Peter Gill, Clare Island resident and professor emeritus of education at Sweden’s University of Gävle, points out that there was an average decline in population of 77 per cent on 11 offshore islands, from Donegal to Cork, between 1841 and 2011. This slowed to 53 per cent between 1992 and 2015, he says.

Tourism is seasonal, weather dependent, and dominated by day trippers in the case of Inis Mór. Water supply can be subject to restrictions, and Inis Oírr is currently reliant on tanker deliveries. The southernmost Aran island, which is now rivalling Inis Mór levels in attracting tourists, with some 200,000 visitors annually, has been lobbying for years for a new pier. A recent Marine Casualty Investigation Board report highlighted its safety risks.

Farming and fishing are subject to EU directives, from habitat to fish-stock protection. More ambitious Aran skippers requiring deep water have moved boats into Ros-a-Mhíl in Connemara. Small-scale island fishermen such as John O’Brien in Donegal have struggled, after refusing to surrender wild salmon licences when the ban on driftnetting was introduced in 2007.

O’Brien turned down the State’s €18,900 compensation offer, and his battle was documented by French film-maker Loïc Jourdain in A Turning Tide in the Life of Man/ I mBéal na Stoirme, a film for TG4. Originally from Inishboffin, off Donegal. O’Brien’s increasing political awareness led him to advocate the idea of “heritage licences” for fishing, tied to a cultural link to an area.

This concept, now backed by Sinn Féin, was recognised by an Oireachtas subcommittee on fisheries. It published a report in early 2014 advocating a number of measures to support the marine economy in coastal and offshore communities.

One of those Oireachtas committee members, Éamon Ó Cuív, is still regarded as a hero on many islands for his efforts to improve transport services and infrastructure during his time as Fianna Fáil minister for community, rural and Gaeltacht affairs from 2002 to 2010.

However, as if to be punished for that, Aran Islanders have experienced uncertainty in the past three years over both air and ferry services. The Government’s chief whip Joe Mc Hugh, who was the junior minister handling the air service contract, has now been given responsibility for islands again.

Simon Murray of the Irish Island Federation points out that the Government’s obsession with value for money belies the return that islands give the State in cultural, heritage and tourism terms. The islands costs the State around €13 million annually, he says, adding that essential services are treated as a sort of charity by some State bodies, rather than taxpayers’ rights.

His federation is constantly wrestling with a lack of joined-up thinking at official level – such as the situation highlighted by this newspaper three years ago where a change in Health Service Executive management resulted in cutbacks in primary care, and over-expenditure on helicopter flights for patients who were precluded from travel on fixed-wing flights.

Observing the struggles further north along the coast have been the residents of the west Cork islands, who now have their own integrated development strategy.

Bere Island representative John Walsh says that the strategy was pioneered by Cork County Development Board official Breeda Murphy and her colleagues, who recognised the importance of islands working as a group, and also recognised that local authorities could play a positive role.

The west Cork strategy for its seven inhabited islands acknowledges the key principles identified in the last major government report for offshore communities, published in 1996. These include recognising the special economic, social and cultural contribution that offshore islands make, and promoting a partnership approach between island communities and State agencies.

Some State agencies work far better than others, and much of this is to do with “boots on ground”. Bord Iascaigh Mhara (BIM) is currently administering a €12 million programme to support projects approved by its Fisheries Local Area Development groups. A separate project by BIM may also prove crucial to the survival of a Mayo community. The agency, which withdrew its controversial application in December 2015 for a finfish farm off Inis Oírr in Galway Bay, is preparing an aquaculture licence application for a 4,000 tonne certified organic salmon farm close to Inishdalla, an uninhabited island southeast of Inishturk.

Dr Gill, who acknowledges his initial opposition to plans for the Clare Island salmon farm, says the project could be vital for his neighbouring community. He has studied the trend towards gentrification on some parts of the west coast, with housing prices being distorted by the second-home market. The gentrification trend is “rampant” on Swedish islands, he says.

Second-home ownership, along with planning restrictions and increasing income disparities, has become a factor on some Irish islands. The O’Hallorans had some difficulty in finding rented accommodation on their return. However, Dr Gill says that Clare Island has successfully avoided gentrification because the fish farm has sustained employment, which has, in turn, kept up primary-school class levels.

He argues that primary schools are a vital life force on islands, transcending the normal school-community relationship. Research he published last year found that pupils in rural and island schools can often perform as well, or sometimes better academically, as their peers in urban schools.

“In Scandinavia, islands are very important for the self-image of a people proud of Viking links,” Dr Gill says. “There is a symbolic value in having inhabited islands as part of an island nation. If the Government is to take one step, it is to recognise the importance of the island school,” he says.

Murray hopes that for Inishturk’s sake the Government takes its situation, and that of other islands, seriously. “My parents witnessed the death [in October 1960s] of Inishark, just a half mile across the water from here,” he says. “When an island population leaves like that, it can never be replaced. All the particular way of speaking, living and making music in that community is lost.”